Permanent Secretary in the Ministry of Agriculture Fisheries and Cooperatives in the Nevis Island Administration Dr. Kelvin Daly delivering remarks at the one day Marine Protection Awareness Workshop at the Nevis Cooperative Conference Room in Charlestown on October 31, 2012

NIA CHARLESTOWN NEVIS (November 05, 2012) — The successful establishment of Marine Protected Areas (MPA) in Nevis depended on the full cooperation of the island’s fishers. Permanent Secretary in the Ministry of Agriculture Fisheries and Cooperatives on Nevis Dr. Kelvin Daly expressed that view, when he delivered remarks at the Marine Protected Awareness workshop on October 31, 2012, at the Ingle Blackett Conference Room in Charlestown.

The day long awareness workshop was hosted by the United Nations Environmental Programme (UNEP)/CEP, Caribbean Marine Protected Area Network (CaMPAM) in collaboration with the Department of Fisheries in the Nevis Island Administration (NIA). Participants were drawn from the Tourism, Historical and Conservation and Fisheries Sectors and the Physical Planning Department.

“The MPA will not be a success if we do not get the full cooperation and support from the Fishers because without enforcement of each one guarding each one it makes no point. Even if we get the Coast Guard on hand and a vessel from the Department of Fisheries, the Fishers know exactly who is doing what and when. 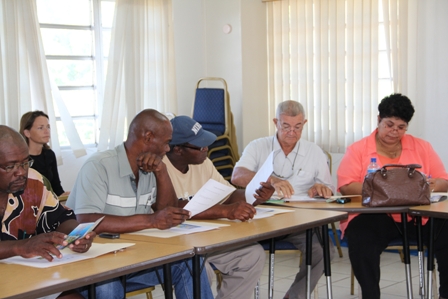 “It is in your best interest therefore, not to say be a snitch but to protect your livelihood. It is all about your livelihood and if you allow persons to intervene and reduce your livelihood, then it is your fault. We cannot be everywhere for everybody but you are out there more than everybody else and therefore you would know who are the interlopers and who is breaking the law. So this project’s success depends squarely on you,” he said.

Dr. Daly pointed to the island of Dominica which he said had experienced great success with its Fishers. He stated that they looked out for each other and ensured that persons obeyed the laws.

The Permanent Secretary also spoke of the dire need for the establishment of the MPAs.

“The pressures on the fisheries have been significant over the years and have been growing steady as persons are becoming more efficient at catching fish. Persons are investing heavily in all sorts of electronic devices to make their jobs easier and getting bigger and faster boats. So we have a lot more persons going fishing and so the pressure is on, especially on the near shore fisheries. 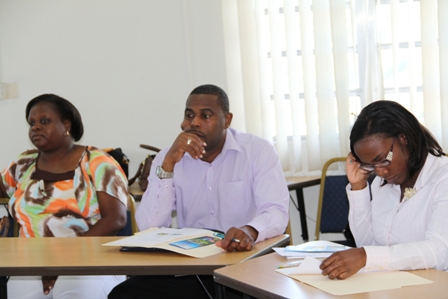 “MPAs came about because we are trying to rescue some of the inshore fisheries from over exploitation and so it did not happen in isolation. There is a problem and one of the solutions to that problem is the establishment of Marine Protected Areas,” he said.

The top Fisheries Official added that the MPAs could not exist in isolation and was a matter weeded with many other environmental aspects and as such should be seen as part of a larger picture which affected the island’s ability to feed itself via its marine resources.

He noted that the Ministry was cognisant that fishermen would be affected and they had to find other ways of assisting them through the provision of other livelihoods to engage in.

In that regard, Dr. Daly explained that the Ministry had embarked on an aquaculture programme and the project was halfway through, excavation was already completed and stocking of the 2000 capacity tilapia farm had reached halfway.

“That is an alternative livelihood for persons to engage in, in that it reduces the pressure on near shore fisheries also. I know historically Nevisians say they don’t eat fresh water fish and I find that to be a little bit bogus these days because last year we imported over US$170,000 worth of tilapia, somebody’s got to be eating it.

“So these efforts taken in totality must be seen in conjunction with MPAs to enhance food security and nutrition security and to provide livelihoods for persons on Nevis,” he said.

The Permanent Secretary further explained that the workshop would serve several objectives among them biodiversity through aquaculture but impressed on the need for more work to be done in that area in the face of declining fish sizes and stocks which Fishers had to go father to catch.

“I don’t think we are doing enough. I think the Fisheries Sector has gone too far south, that we actually have to intervene beyond MPAs and to start looking at artificial reefs by whatever means necessary,” he said.

Also present was Marine Park Manager at the Statia National Marine Park, Assistant Fisheries Officer in the Department of Marine Resources in St. Kitts Mr. Lorinston Jenkins and Director of Fisheries on Nevis Mrs. Althea Arthurton who served as facilitators for the Workshop.