Mr. Hector was at the time delivering brief remarks at a simple but significant handing over ceremony at the Taiwanese Mission at Cades Bay. He was presented with keys to the agricultural vehicle by Ambassador of the Republic of China/Taiwan to St. Kitts and Nevis His Excellency Miguel Tsao.

The Agriculture Minister said he was heartened by the generosity and assured the new tractor would be cared for by the Department of Agriculture.

“Today I specifically want to thank you for the gift of a Massey Ferguson tractor 5340. We are all aware that land preparation is key to production and indeed having another tractor added to our fleet it would go a long way in ensuring that the levels of increased production that we are hoping to achieve that we would.|

“I want to say to you Ambassador that you have given words asking that we take care. I want to assure you that the tractors in our fleet are some of 30 years old. So you can well imagine, for you to have that sort of age Ambassador you must have taken care of them… Members of the Department, members of the small farm equipment pool are indeed grateful and would take care of this tractor as it would to increase agriculture production on the island,” he said.

Mr. Hector also used the opportunity to acknowledge the other areas of corporation between the Federation and Government of China/Taiwan and further expressed gratitude. He said he remained hopeful that the friendly relations would continue in the future at an even greater level.

Ambassador Tsao in his remarks commended the Agriculture Minister for taking agriculture to a new high on Nevis.

“Honourable Minister, I commend you and your team for taking agriculture to a new high. I wish to inform you that the Embassy and the Technical Mission in St. Kitts/Nevis will continue to move forward with other important areas of collaboration together with your Ministry,” he said.

While he impressed on care for the new tractor, the Ambassador stated that although Nevis was small like his country, they were both large in agriculture and culture.

“The name Queen of the Caribbean is aptly placed due to the captivating beauty, cleanliness and the tranquillity of this beautiful island. The island has even greater potential in a lot of other areas. I implore you to take care of this tractor so that it can last a long time and give you proper years,” he said.

He used the opportunity to speak to the collaborative ventures his government was involved in with the Nevis Island Administration and said the handing over ceremony signified the close relationship between the Republic China Taiwan and St. Kitts and Nevis. 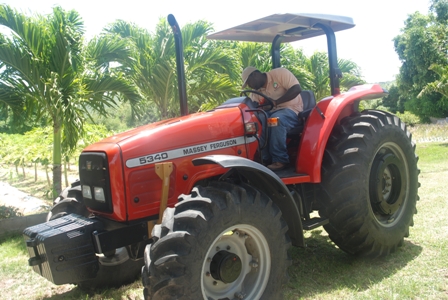 “Since I took office almost two years ago, I have eye witnessed the great achievements made by the Nevis Administration – the Agriculture Programme, laptop programmes, the police barracks and the performing arts centre are all testimony and a footprint of the good working relations between our two sides.

“It was only a couple months ago, I still remember in my mind, my journey to Nevis to witness our collaborative effort toward the completion of the performing arts centre. All of us can attest that the theatre is of world class standard, not only in the architectural design but also the equipment and the stage. These ingredients, I am sure, will lift up the cultural level for the people and also the Nevis Island Administration,” he said.