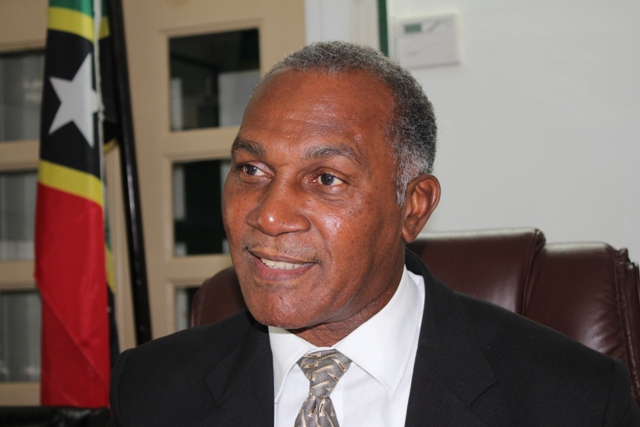 Premier of Nevis and Minister of Finance in the Nevis Island Administration Hon. Vance Amory
NIA CHARLESTOWN NEVIS (June 30, 2014) — Value Added Tax (VAT) will not apply to existing development projects on Nevis, however, new projects will not be afforded the same treatment.
Premier of Nevis and Minister of Finance Hon. Vance Amory in a televised address on June 20, 2014, while he reported on a meeting with Prime Minister of St. Kitts and Nevis the Right Hon. Dr. Denzil Douglas which dealt with a number of matters related to the Nevis Island Administration, made it clear that only new developments would be subjected to VAT.
“We also dealt with the matter of the VAT credit for ongoing projects. Those projects are development projects which have been granted VAT holiday as it were. Now that VAT credit, will continue to apply to existing projects. Those existing projects I can speak of, say The Hamilton, I can speak of the Tamarind Cove development and…others which I am not able to name off hand but at the end at any new development projects, [they] will not be afforded that kind of VAT credit,” he said.
Mr. Amory gave the reason for the decision and cited lingering financial difficulties experienced by St. Kitts and Nevis.
“The reason for that and I think our people need to be advised, is that the financial difficulties of St. Kitts and Nevis, even though, the International Monetary Fund (IMF) has indicated that there are signs of improvement, that we are still not yet out of the woods and we therefore have to ensure, that the Government and the Administration collect the maximum tax without increasing the levels of taxation.
“It means that we have to look at those concessions which have been granted. We have to review the concession policies and we have to again, call on our people not to seek to engage  in large expenditure, large commitments which would overtax their earning power and therefore put pressure on them as individuals  and also pressure on the government’s financial situation, causing the government, in a way, to increase taxes,” he said.
The Premier explained that the Administration did not want to increase taxes.
“We do not want to increase taxes. It is something which I personally believe, we ought not to do. My approach to the whole matter of government revenue and revenue collection, is that we should seek to maximize our collection, to be as efficient as possible and that we should try to increase the level of investment in the economy to create more employment, to create more expenditure, so that we can, as a government, collect more at the end of that whole process of that cycle,” he said.