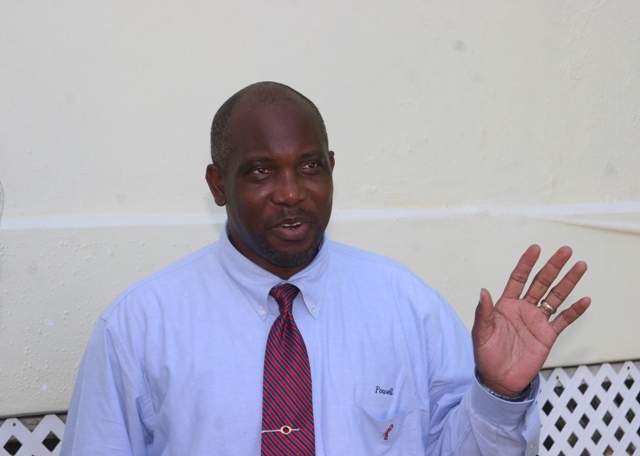 Junior Minister with responsibility for Public Utilities, Physical Planning, Natural Resources and the Environment in the Nevis Island Administration, the Honourable Carlisle Powell.

Minister Powell who also holds responsibility for Communication, Post and Works in the Nevis Island Administration [NIA] told the Department of Information, last week, that several Caribbean countries, following Nevis’ discovery of geothermal energy, had attempted to mimic the island’s actions by tapping into their renewable energy sources.

While many islands, according to Minister Powell had been “talking about Wind Farms forever,” “Nevis did more than talk.”

“We did the talk, we negotiated the agreement and the contract and we now have a Wind Farm which is operating,” he said.

The discussion came as a result of the recent tour of the Madden’s Wind Farm by environmental ministers from across the Organisation of Eastern Caribbean States [OECS] who visited Nevis for the 14th annual OECS Ministers Meeting on the Environment and showered praises on the island for its renewable energy initiative.

When asked if Nevis will ever deliver geothermal energy, the enthusiastic Natural Resources Minister responded, “absolutely,” highlighting that geothermal energy would ensure insurmountable benefits for Nevis.

According to Minister Powell, the NIA has in its possession a letter of intent from sister island St. Kitts to purchase geothermal energy whenever it becomes available. He added that Puerto Rico’s Secretary of State, at the Caribbean Renewable Energy Forum [CREF] in the Bahamas, “gave the assurance that they [people of Puerto Rico] had done their homework and they are absolutely ready to purchase at least 400 megawatts of power from Nevis when that becomes available.”

“Don’t let anybody fool you” Powell exclaimed, “any Caribbean island which is producing and selling fossil fuel energy for US$0.40 per kilowatt hour must be keenly interested in purchasing, from Nevis, geothermal energy at a fraction of that cost.

“It can work and it will work,” Minister Powell said as he encouraged the entire Nevisian community to support the NIA as it seeks to take advantage of its renewable energy resources.