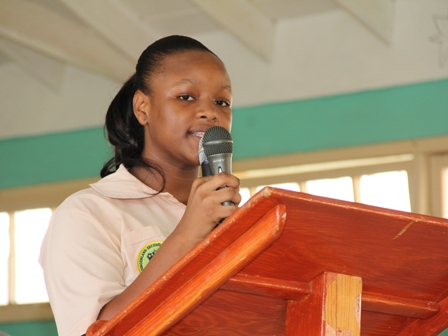 The reigning Caribbean Junior Minister of Tourism, Nevisian student of the Gingerland Secondary School Ms. Neila Jones
NIA CHRLESTOWN NEVIS (November 21, 2013) – The reigning Caribbean Junior Minister of Tourism, Nevisian student of the Gingerland Secondary School Ms. Neila Jones, has been invited to Barbados to join a studio panel of dynamic youth from across the region, in a television show dubbed “Tourism the Y-Factor”.
The show will be aired live on Wednesday 27th November, 2013 from 8:00 p.m. in over 20 Caribbean countries on the Caribbean Media Corporation (CMC) cable channel Carib Vision, as well as in New York, New Jersey and Connecticut via cable.  On the local cable network, CMC is aired on channel 62 on Nevis and channel 73 on St. Kitts.
Neila will join three other studio panelists; Attorney-at-law from Barbados Sade Jemmot; Undergraduate tourism student at UWI, Barbados Kareem Yarde, and Tourism Analyst/former CTO scholar from St. Kitts Kennedy Pemberton.
Toni Thorne, a 26 year old ambitious entrepreneur, magazine editor and actor from Barbados will host the show in front of a live studio audience. The general public will be invited to participate via phone, social media and or email.
The show is an edition of a live television series produced by the Caribbean Tourism Organization (CTO) called “Destination Caribbean”, in celebration of Caribbean Tourism Month.
According to CTO, the edition “Tourism the Y-Factor” aims to amplify the voice of the youth on tourism matters in an effort to provide suggestions to tourism leaders…’
CTO’s Communication Specialist Johnson Jno. Rose, echoed the importance of the show and Neila’s role as one of the panelists, stating,
“In keeping with our mandate to provide leadership in sustainable tourism, the CTO continues to invest in the development of youth as the future of our industry.  This special edition of the Destination Caribbean TV Show is our way of providing them with an additional platform from which to demonstrate their capacity to shape our tourism industry.
“We are pleased to have our reigning Youth Congress champion, Neila Jones, and encourage regional tourism leaders to tune in to learn how they can better partner with the youth of the Caribbean to take our tourism sector forward,” he said.
The Hon. Mark Brantley, Minister of Tourism in the Nevis Island Administration has expressed his delight at Neila’s success and welcomes her participation in this historic television event.
“Neila is a tremendous asset to Nevis and to the region. Her voice and the voices of her peers will be critical in shaping the future of tourism in the Caribbean,” Minister Brantley stated.
Ms. Jones won the CTO Youth Tourism Congress held in Martinique earlier this year, at the annual State of the Industry Conference (SOTIC).
About the Caribbean Tourism Organization:
The Caribbean Tourism Organization (CTO), with headquarters in Barbados and offices in New York and London, is the Caribbean’s tourism development agency. It comprises membership of over 30 countries and territories including Dutch, English, French and Spanish, as well as a myriad of private sector allied members.
The CTO’s vision is to position the Caribbean as the most desirable, year-round, warm weather destination and its purpose is Leading Sustainable Tourism – One Sea, One Voice, One Caribbean.