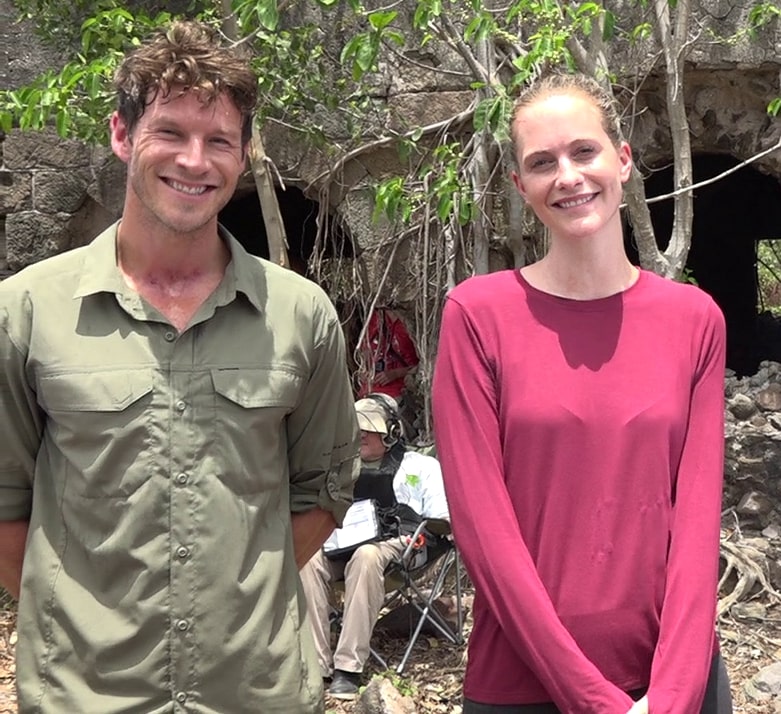 Actors Chad Michael Collins and Poppy Delevingne on the set of MSR Media’s “Assailant” being filmed in Nevis (April 23, 2021)

NIA CHARLESTOWN NEVIS (April 27, 2021) – – Two international actors currently on location filming a movie in Nevis say they have fallen in love with the island.

Collins, who also starred in “One Year Off”, MSR Media’s first movie filmed on Nevis over the past few months, said Nevis is his new favourite vacation destination.

“Fortunately this is my second film that I’ve been able to do in Nevis thanks to Philippe [Martinez] and his company so I’m having a blast. It’s been fun just to see the various locations that we didn’t really get to play with too much in the last film.

“I’m coming up on three months on Nevis and we’ve made a lot of friends and a lot of personal changes, so I do look forward to coming back one day and enjoying more filming.

“This is my number one vacation spot now,” he said while filming at the sugar mill ruins at New River Estate on April 23.

Ms. Delevingne, who is on her first trip to Nevis, also raved about the island paradise.

“It’s going to be very hard to get me off this island. I’m not going to want to leave Nevis by the end of this.

“It’s been such an adventure and such an honor to be making this movie and to be here. I will be back in July,” she said.

Tom Paton, director of the movie “Assailant” said he too is enjoying working in Nevis.

“So far it’s been great. We’ve found the people on the island very helpful. We’re certainly having a lot of fun; we’re loving it,” he said.

The filmmaker and actors are part on an international cast and crew brought in by MSR Media producer Mr. Philippe Martinez.

MSR Media and the Nevis Island Administration (NIA) have partnered to launch a film industry on Nevis. The UK-based company has completed one movie and the second is underway. They are scheduled to film a total of six movies on the island.

Dozens of nationals and residents have been hired as supporting actors, actors with speaking roles and as members of the movie crew.