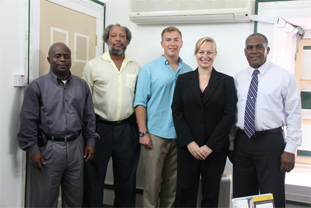 (L-R) Permanent Secretary in the Premier’s Ministry Wakely Daniel, Director of the Nevis Disaster Management Department Lester Blackett, representatives from the US Southern Command based in Florida Sgt. Zachary Broz and Maj. Laura Miller and Premier of Nevis and Minister responsible for Disaster Management Hon. Vance Amory at his Bath Plain Office on July 11, 2014
NIA CHARLESTOWN NEVIS (July, 11th 2014) –Two representatives from the United States Southern Command based in Florida paid a courtesy call on Premier of Nevis and Minister responsible for Disaster Management Hon. Vance Amory at his Bath Plain office on July 11, 2014, one day before their scheduled return to the United States.
The two-member team of Maj. Laura Miller and Sgt. Zachary Broz, who had been on the island for a week, expressed satisfaction with the programmes of the Nevis Disaster Management Department under the leadership of its Director Lester Blackett.
“We came here to evaluate the Emergency Operations Centre in Nevis and we have been absolutely thrilled with what we have been able to see and the programme that has been put together, specifically the work under Mr. Blackett.
“It has been phenomenal and it’s all about helping the people of Nevis and strengthening the relationship between the United States and the Federation of St. Kitts and Nevis. Through these types of partnerships, the US government funded the construction of the Emergency Operations Centre along with the warehouse full of disaster supplies and again these types of relationships are strengthened through projects like this, to help the people here in times of disaster, knowing that there is a stable structure with supplies to help the people,” she said.
The Major also stated that SOUTHCOM would like to see further strengthening of relationships and partnerships on Nevis through training and other programmes, in the hope that they would help to move the relationship forward.
Sgt. Broz gave his thoughts on what he had experienced during his visit.
“I think that what Mr. Blackett is doing is terrific. It’s a good thing that we had someone like him here when the construction of this project started.
“The EOC is terrific and I think that Mr. Blackett has great ideas for Nevis and for disaster readiness and I think, that Nevis will do good in the future when it comes to preparation for natural disasters,” he said.
Meantime, Mr. Amory in brief remarks gave an insight into some of the discussions held with the SOUTHCOM representatives during their visit.
“We have Major Miller and Sargent Broz who have come to talk with me after having been here for a few days, to see how and in what way, they could assist us further to make our ability to respond if there were a disaster.
“We discussed some issues providing some additional equipment. We are very concerned and I think, Major Miller recognises that we do have some needs, if we are to make our people more comfortable. One such area is looking at providing some assistance with some fire engines for us, to have in the out stations. I think that’s important. We know it has to be discussed with her superiors but we are just raising it because we want to make sure that our people can feel comfortable and we know the shortage which we have,” he said.
Mr. Amory added that it was always a happy moment when representatives from the US government agency SOUTHCOM visited and that the agency was instrumental in setting up disaster preparations offices that would help officials on Nevis to be in a state of readiness in the event of a disaster.
Brief remarks also came from Permanent Secretary in the Premier’s Ministry Mr. Wakely Daniel and Director of the Nevis Disaster Management Department Lester Blackett.