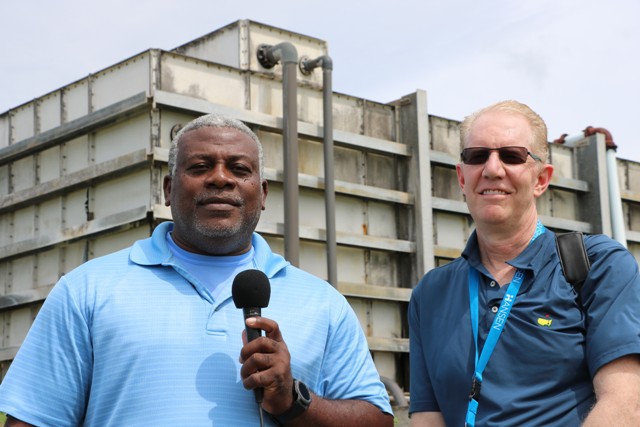 (l-r) Mr. Floyd Robinson, Manager of the Water Resource Management Department in the Ministry of Communications and Project Manager for the installation of a filtration system at Hamilton; and Mr. Greg Gilles, Vice President of AdEdge Water Technologies; on site at Hamilton on October 18, 2019, where the water filtration system will be installed

NIA CHARLESTOWN NEVIS (October 24, 2019) — The Nevis Island Administration (NIA) is investing in a water treatment system which will generate an additional half a million gallons of water per day when it’s installed to treat water at a well in Hamilton.

Mr. Floyd Robinson, Manager of the recently established Water Resource Management Department in the Ministry of Communications, told the Department of Information that the filtration system will be installed at Hamilton.

“In 2008 we had three wells that were dug in addition to the maybe 18 wells that we had prior but these three main wells were dug by BEAD [Bedrock Exploration and Development Technologies]…but one of those three wells had high levels of iron and manganese and so we were unable to use it. The levels of iron and manganese were way above the World Health Organisation’s standards for water consumption.

“Currently, the government is engaged in getting a filtration system from AdEdge [Water Technologies], a company in the United States, to be installed, and so…water from that particular well which has been sitting there for almost 10 years will be filtered. The excess iron and manganese would be removed. We are talking about half a million gallons extra water that we will put in the system and that would put production above 2 million – to 2 1/2 million per day,” he said.

Mr. Robinson who will serve as Project Manager for the project on behalf of the Nevis Water Department believes the additional water would serve the island well, given the drought conditions it has been experiencing in recent years, forcing the department to ration water.

“With the current global changes that we are going through [with] climate change…Nevisians…just went through a dry period where the water department had to be rationing water so an extra half a million gallons of water a day would be a very big deal for the island,” he said.

Meantime, Mr. Greg Gilles, Vice President of AdEdge Water Technologies who made a presentation to 41 delegates during a technical tour on Nevis as part of the recently concluded Caribbean Water and Waste Water Association (CWWA) conference on St. Kitts, following a visit to the site for the installation of the filtration system on October 18, 2019, said the filtration process would be environmentally friendly.

“The system is a simple filtration system for iron and manganese removal that will involve entirely back wash recycling, and all of the residuals will be captured and there will be no discharges also. So it’s a very environmentally friendly process that we put together.

“We are going to be building this system in the States, and we will be shipping it in December. We have assembled a nice team to work with from the States that are going to help with both engineering and construction and so we will be starting that construction in December and in January, and we will be up and running with the treatment plant to supply the community and I believe some of the resort hotels starting probably in February or so,” he said.

Mr. Gilles also used the opportunity to speak of the project’s goal.

“The current quality of this water is very poor and we hope to make it amazing quality water that would be very acceptable and people would really, really like it, enjoy it. So that’s the overall goal from the project is to produce something that they currently don’t have and they desperately need,” he said.