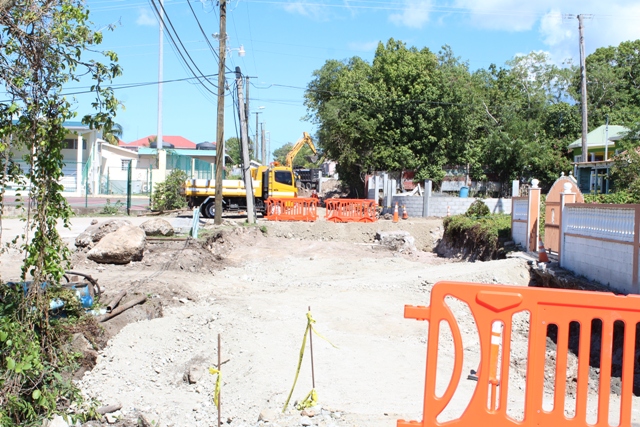 Ongoing work in the third section of the first phase of the Brown Hill Road Rehabilitation Project on October 31, 2018

NIA CHARLESTOWN NEVIS (October 31, 2018) — Hon. Spencer Brand, Acting Premier of Nevis and Minister of Public Works, expressed satisfaction with the status of Phase One of the Brown Hill Road Rehabilitation Project, when he took a first-hand view of ongoing works on October 31, 2018.

Mr. Brand who was accompanied by Dr. Ernie Stapleton, Permanent Secretary in the Ministry of Public Works; and Mr. Raoul Pemberton, Director of the Public Works Department, also commended the department’s staff for their quality of work on the project which commenced six months ago.

“Let me say how happy I am to update the general public as to the progress we are making here on the road rehabilitation project, and I want to commend the director Mr. Raoul Pemberton for the hard work he has been putting in here with his team…

The minister stressed the importance of informing the public at various stages because they carry the financial cost of the project.

“I believe that it is important to update the public from time to time on these projects because at the end of the day, it is tax payers who would have to pay for it.

“I think that it is important for you to see these projects in these stages and then to the completed stage because I believe that the general public would recognize the hard work that the Public Works team is doing,” he said.

Mr. Brand used the opportunity to inform the public that the money spent by the Nevis Island Administration for the project is well spent.

He registered his gratitude to the residents of Brown Hill for their patience in relation to the ongoing construction and thanked them.

“I want to say thank you to the residents of Brown Hill in particular. I know that they have been enduring some disruptions, noise and dust, some inconvenience and I want to say to them how thankful we are for their understanding and their patience,” he said.

Mr. Pemberton noted that the first section of Phase One was already completed. However, work is ongoing in the second and third sections.

“We are now doing some excavation of the old road and re-establishing some new road base material. We have also constructed some retaining and boundary walls. This section is about 600 to 700 feet in length that we are currently working on and within a few short weeks we expect to have that sorted out.

“The second section has a total length of just about 1,100 feet. We have already ripped the old material from the road for construction of the curb and slipper drains. We have already placed the base. We are awaiting the final grading and asphalting. Some of the public works workers are doing some final touches to the driveways and some of the edges of the curb. We are expecting that by next week Friday we would have this area ready for asphalting,” he said.

The director explained that although the project had experienced some delays due to unforeseen factors they are catching up and expect to meet their stated deadline of mid-December.  The first phase commenced from above Sandy’s through to Brown Hill Communications.

The second phase of the project is expected to commence in 2019.