Minister responsible for Public Utilities and Natural Resources on Nevis Hon. Carlisle Powell during a site visit at Stoney/Hill (centre) and Health Advisor Mrs. Patricia Hanley (r) get an update of the water project at Stoney Hill from Acting Manager of the Nevis Water Department Mr. George Morris (l). Also present but out of picture are Permanent Secretary Mr. Ernie Stapleton and his assistant Mr. Wakely Daniel

In an interview with the Department of Information, Mr. Powell said the additional water wells that had been drilled by Bedrock Exploration and Development Technologies (BEAD), at the request of the NIA, continued to keep a steady water supply to consumers since drought-like conditions began affecting the island over the last two months.

“I want to say to all of the people of Nevis, if we did not go with the BEAD drilling programme, which is now giving us 1 million gallons of water per day extra, we would have been suffering terribly in the drought situation that we are having at the present moment.

“The drought is not one which is isolated to Jamaica or St. Lucia or Trinidad or St. Kitts where they are either rationing or thinking of rationing water, the drought is affecting Nevis as well. The only difference between now and then say four years ago is the fact that we have two BEAD wells which are producing an extra 1 million gallons of water per day,” he said.

The Public Utilities Minister noted that the sitting Administration had achieved much in its quest to upgrade the water system on Nevis since it took office in 2006 and pointed to an ongoing project, that would increase the carrying capacity of the distribution network. Once completed the extra water harnessed from the new wells will be transmitted throughout the island.

“This work is to the benefit of the entire population of Nevis because we are replacing a 6inch line from the area of Golden Rock all the way to the Stoney Hill Reservoir.

“What it means is that with the increased capacity, caused by the 8inch line we will be able to use another of the idle boosters that we have sitting down at Fothergills and be able to pump more of the water that we have coming from that new BEAD well and get that up to Stoney Hill,” he said.

The Stoney Hill Reservoir is used to supply water to the people of Gingerland through to Charlestown.

Notwithstanding, the project is not restricted to the pipe upgrade for Gingerland but according to Mr. Powell  the addition of a new 4 inch main being laid in the same trench would increase the capacity of the pumping main to consumers in the Golden Rock/ Stoney Hill areas.

He described the project as significant considering the existing drought-like conditions on the island.

“So for us this is significant especially in these very, very challenging times where the drought is on and where we must find additional water to keep the people of Nevis satisfied 24 hours a day seven days a week,” Mr. Powell said.

The Minister further explained that the smaller old metal pipes that had been used since the 70s had served well but were being replaced with polyethylene pipes, a more durable and economical material. 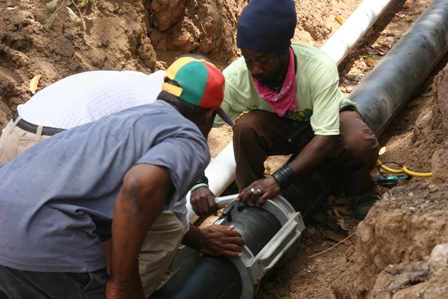 “It is heavier so it takes more manpower to wrestle but it is easier to work with. We are told that the life of the pipe itself is longer and the risk of corrosion is less. When the Water Department does repairs to any of these pipes and you see the reduced capacity inside them in terms of the diameter caused by corrosion, then we know that we have to make an improvement to be better able to serve the people and do that in a safer much healthier way as well.

“Maintenance is a lot less on these pipes because to fuse the joints they don’t have to use the old PVC cement, this is electro fusion jointed … and that serves very well in terms of bonding,” he said.