NIA CHARLESTOWN NEVIS (April 08, 2013) — Minister of Agriculture in the Nevis Island Administration Hon. Alexis Jeffers said though he was impressed with the volume of vegetable and livestock production on the island, in the short term,  he would like to see more young persons involved in agricultural production and the introduction of more technology in the sector.


He made the comment at the end of his first official island-wide tour on April 02, 2013.  During the tour, the Agriculture Minister had a firsthand opportunity to observe agricultural production on the island and to find out the challenges faced by those involved in the sector.

“I would like to see agriculture at the point where we are self sufficient, meaning that importation of some of the products that we can produce here is done away with and that is in the short term. Also, I would certainly like to see more farmers getting on board starting with our young men and women.

“Obviously there is money to be made in farming but most persons decide not to get involved in farming because of perhaps the hard work involved. [In March] we had the handing over of a shade house at Charlestown Secondary School, that indicates that there are new technologies that we will have to introduce here in Nevis, so we will encourage our young men and young women to get involved,” he said. 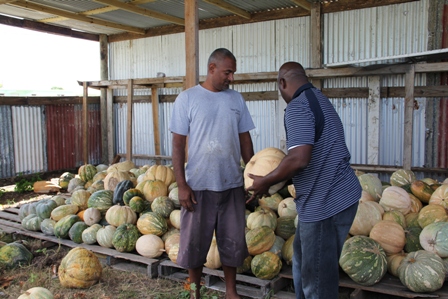 According to Mr. Jeffers, the Department of Agriculture would have to begin identifying farmers already involved in the sector who offered that type of technology which made the business of agriculture easier, more productive and enjoyable.

“I would like to see more farmers being offered the necessary technology that would make farming more enjoyable and more productive and those are the things we have to concentrate on over the next year or so,” he said.

The Minister spoke positively about the enthusiasm in agriculture on the island and spoke on the positives and negatives he had witnessed during the tour and underscored his commitment for the agricultural sector.

“I can truly see the interest. As you drive around the island the interest is there in agriculture but of course, the negative is that persons don’t seem to feel like they are getting the support from the Agricultural Department. I think that is something we have to turn around quickly because we do want to ensure that we have that sustainability in agriculture and food production continue on the island, so that we can feed ourselves… 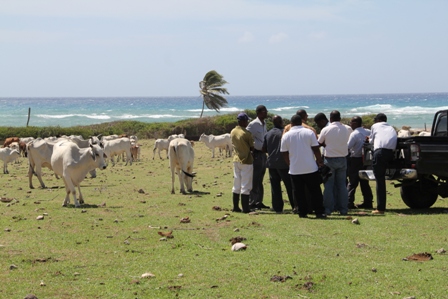 “I do believe, based on what we have seen today, there is indeed hope. We just have to figure out a way to overcome those hurdles that we have encountered in the past that are still in our way,” he said

With regard to the two Government-owned estates visited, Mr. Jeffers explained that there were disappointments but under his watch,  heplanned to revamp the Maddens and Indian Castle Estates.

“That’s where the negative comes in. We have some challenges at Indian Castle…The fence down there is a challenge that needs to be addressed. There are dedicated herdsmen and farmers down there and they need the incentive to continue day after day, to ensure that we protect those areas and ensure those animals are well taken care of.

“Maddens presents a more challenging situation for us…The estate has certainly taken some backward steps but we looked at it and we have come up with a plan moving forward to bring that estate back in shape. It would take some time. Everything is a work in progress but once we are able to clean that estate up and do the necessary fencing, I am sure we can enhance the livestock farming in that area,” he said. 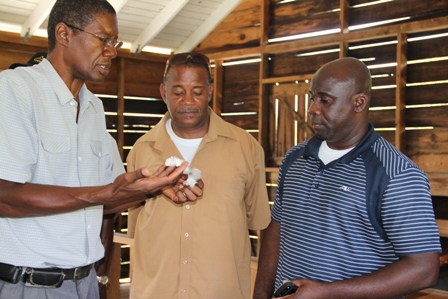 The Agriculture Minister stated that he wanted to see both estates returned to their glory days when the Government-owned Abattoir was supplied with livestock from the farm.

“I want us to feed our Abattoir with livestock or eat from these estates. The importation of meat I would like to see that reduced and that would be the plan moving forward. So livestock would have to play a major part in our strategy moving forward, in terms of feeding our people with our locally produced beef, mutton and poultry,” he said.

The tour began with a visit to the Nevis Abattoir and Meat Processing facility and Veterinarian Division at Prospect, Farmer Sias Persaud at Clay Ghaut, Government owned livestock and agricultural farms at Indian Castle Estate, onion production, storage facility and Cotton Ginnery at New River Estate, Stock Farm at Maddens Estate, Farmer Ellis Philip at Potworks and ended at the storage room of the Department of Agriculture’s Marketing Division in Charlestown. 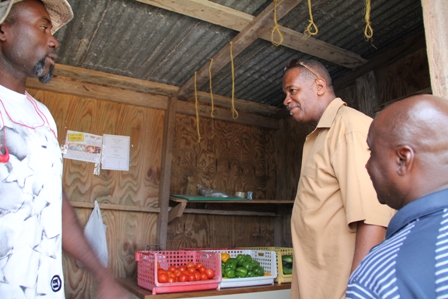