Premier of Nevis Hon. Vance Amory
NIA CHARLESTOWN NEVIS (April 05, 2013) —The Nevis Island Administration (NIA) stated its intention to protect Nevis’  pristine environment and warned persons involved in illegal sand mining that going forward there would be a zero tolerance approach in an effort to stamp out the illegal activity.

Premier of Nevis Hon. Vance Amory, accompanied by Senior and Junior Ministers of The Environment and Physical Planning in the NIA made the Administration’s position clear, at a press conference on March 28, 2013 at the Llewellyn Newton Disaster Management Facility at Long Point. He noted that the Administration wanted to enlist the public’s support for its campaign to end illegal sand mining which had over the years adversely impacted the island’s beaches, coastline and environment.

“Our main purpose is to get a firm understanding by those persons who have been engaged in illegal sand mining, to stop it.

“That is the purpose and we are asking the Press to provide this public outcry so that our people can be enlisted in the fight against those who insist, even in the face of the laws which are there to protect or to prevent illegal sand mining, they seem still prepared to do it,” he said.

Mr. Amory stated that the blatant disregard by those persons engaged in sand mining suggested that they had no respect for their country, the environment and the law.

He noted that the protection of the island’s coastline was of paramount importance to the Administration and it was intent on restoring respect for the law, institutions and the environment.

The Premier listed a number of negative effects illegal sand mining had on the island, among them, the erosion of the coastline which he said had cost the loss of significant historical properties especially in the Indian Castle area where he had been advised that illegal sand mining was most prevalent. 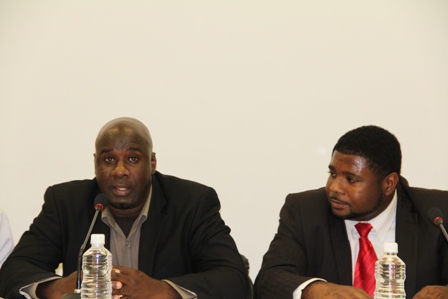 “It reduces the beauty of the beaches which we need as additional marketing tools for our tourism industry; it exposes the county to erosion; it also creates a situation in which the breach of the law, if allowed to continue, may escalate to other areas,” he said.

According to Mr. Amory, it was the Administration’s intention to find persons that would provide surveillance and inform the relevant authorities on illegal sand mining activities in the Indian Castle area and make periodic visits to other suspected areas in an effort to stop the practice.

Notwithstanding, he appealed to members of the public to be the eyes and ears in the campaign against illegal sand mining. He urged them not only to warn those engaged in the activity but also to notify the necessary authorities or the Minister to ensure a quick response. In that way those who breached the law and were engaged in the destruction of the environment could be dealt with in accordance with the law.

The Premier also had some advice for the Police and told them they should notify the Administration if they had been experiencing any difficulty with enforcement from a legal standpoint of the Environment Protection legislation. 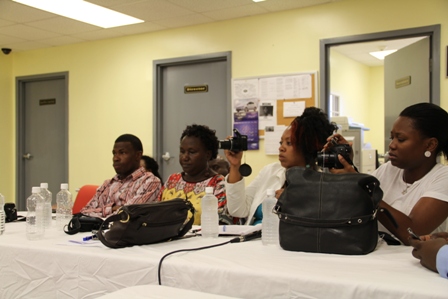 “I know sometimes we pass laws in the Parliament and we think because we pass the law that it will automatically be enforced when it is ratified but there may be loopholes, draw backs there may be problems in the enforcement of the law.

“I want the Police to say to us: ‘Listen, these are the difficulties in enforcing this law.’  If we can get that information, then we can amend the law to make the process of enforcement that much more effective, so that we can in fact accomplish the reason for enacting the law and that is the protection of our environment, protection of our ghauts, protection of our beaches and our coastline,” he said.