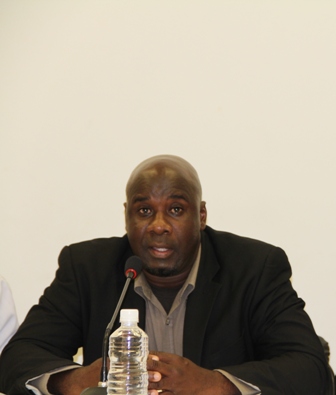 His comment came when he delivered remarks at a press conference hosted by the Nevis Island Administration (NIA) on March 28, 2013, at the Llewellyn Newton Disaster Management Facility at Long Point. The conference was held in an effort to enlist the support of the local media and the public to help bring an end to the illegal practice sand mining that has plagued the island for many years.

Mr. Jeffers, who is also the Minister of Agriculture, said he was aware that the practice also had dire effects on the island’s marine life.

“I know sand mining does have an impact on the marine life here on the island. Indeed the sand is there for a reason and if we remove that reason, we remove a particular element of the ecosystem that would create problems for future generations to come.

“So this is an effort on our part, to protect something that we believe is important to our very survival on this island. We have cases of rising tides; ocean levels are rising and there is a reason why the sand is there. If we love our country, if we love the environment, we should all be playing our part to ensure that this harmful effect of sand mining is done away with,” he said.

The Minister publicly gave support to both the Department of Physical Planning and the Police and said he hoped they would address the serious issue of illegal sand mining in a forceful way.

He noted that the laws pertaining to illegal sand mining had been on the books for many years before the sitting NIA took office two months ago.

“The laws are there; it is nothing that wewould have implemented. It has been there for many, many years but over the years it seems like persons who were in authority, and I am not pointing a finger at anybody, may have turned a blind eye to this issue or saw it happening and refused to do anything.

“We have been in government for just about eight weeks and this became an issue even before we came into government but now that we are in government, it is an issue that has to be addressed by this Administration, in order to ensure that there is long-term benefits for this island in terms of the economy and also in terms of our ecosystems,” he said. 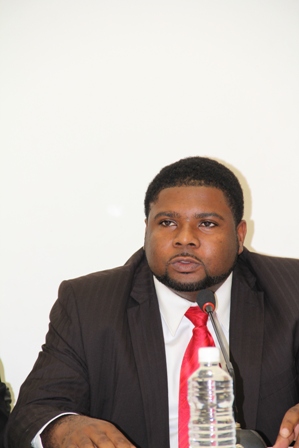 Meantime, Junior Minister of Physical Planning and the Environment Hon. Uthant Troy Liburd said Nevisians should be inspired by the lyrical content of the national anthem and care for the land of their birth.

“The national anthem starts ‘Oh land of beauty’…this land that is mother to us all, that has done so much for us, that has taken care of us. She provides with water, shelter, food. I think that the very least we can do is to take care of her,” he said.

The Junior Minister said although the Administration was aware of the need for building material, the beaches had to be protected and he gave a major reason why.

“People come from all over the world to Nevis, they come to mingle with our culture but for some of those who are not aware of our culture they come for the sun, the sea and the sand. If we are to continue removing that sand, then it takes away from a very big part of us.

“Tourism has been the backbone of our economy for a very long time and in this climate that we live in now, we are at a point where our Tourism Industry can take off. If we continue to damage the areas surrounding our cost, then that would be a lasting loss for us as Nevisians…What we are saying is, let us live in harmony with nature. Let us live but let us not destroy,” he said.