Her comment came while she handed over a green house to Premier of Nevis and Minister of Education Hon. Vance Amory on March 28, 2013, at the Charlestown Secondary School compound.

“We want to take the opportunity to thank the students and the teachers in the schools for acceding to our requests to work with the schools and the Ministries of Education across the region, to allow us into the schools to provide technical cooperation which is actually new to IICA working with the schools in this way.

“Usually we are out in the open fields, so we want to thank the Ministries of Education and the principals and teachers of the schools that allow us to go into the schools and provide this kind of technical cooperation,” she said. 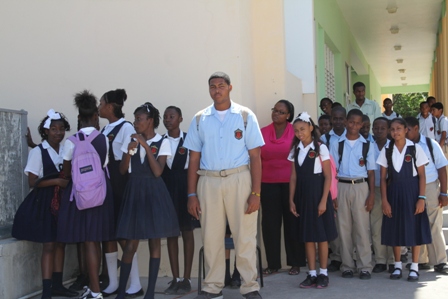 According to Mrs. Gordon, shade house technology was a new technology but was a refreshing change to the agricultural landscape of St. Kitts and Nevis. She recalled her experience with her earlier attempts to introduce the technology in the Federation.

“I remember coming to St. Kitts and Nevis a couple years ago and mooting the idea of putting down green houses which were introducing the technology which we were doing in other countries across the region and I would like to say that someone said to us ‘nah that would not work in St. Kitts and Nevis’.

“We are very happy today that that scenario has changed and has changed drastically for the benefit of the agriculture landscape,” she said.

The IICA’s Caribbean Representative also stated that she was pleased to see the advancements made in the agro processing sector in St, Kitts and Nevis, since as an agro business specialist in another capacity she was able to assist the agro processors and the entrepreneurship programme that she was mooting at the time across the region. 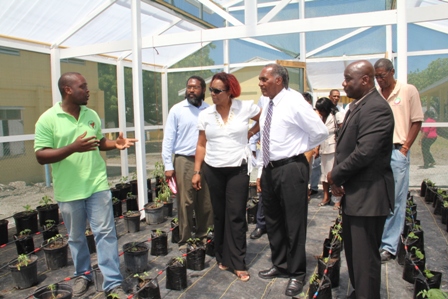 Mrs. Gordon stated that the agro processing sector was critical to the success of shade house technology because they were intricately linked.

Notwithstanding, the IICA ECS Representative impressed on the Minister of Agriculture and the Department of Agriculture that they should gave effective data collection and data mining parallel to the erection of the green houses.

She explained that the important  information collected would effectively capture the benefits of the introduction if the green houses to Nevis in economic terms and would also provide investment information to farmers which would assist them to make the right investment decisions. 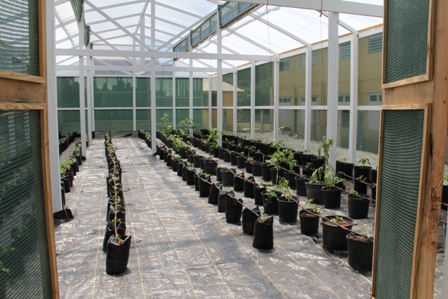 “The Department of Agriculture would be well informed to ensure that the extension officers should be helped to get some training in green house agronomy that would help them to service the budding sector that you have here,” she said.

Regarding the island’s population, Mrs. Gordon said they too should be sensitised about the island’s changing agricultural landscape, with the introduction of the green houses.

“The population must also be sensitised that the landscape of agriculture. The profile of agriculture in the country is changing and placing the green house in the school is not by accident. It is by design because if we can conduct agriculture in a learning environment, half of our work is finished.

“We don’t need to spend time to re-engage youth in agriculture which is a challenge for us these days. So let us ensure that the students of the school and the principals and teachers students understand that this is smart agriculture and not hard work agriculture,” she said.