Premier of Nevis and Minister of Education in the Nevis Island Administration Hon. Vance Amory
NIA CHARLESTOWN NEVIS (April 04, 2013) — A new shade house was officially handed over by Representative of the Inter-American Institute for Cooperation on Agriculture (IICA) Offices in the East Caribbean States Mrs. Una May Gordon, to the Ministry of Education on Nevis for use by the Charlestown Secondary School in its agriculture programme.  The handing over took place at a ceremony on the School’s premises on March 28, 2013.

In response to the presentation, Premier of Nevis and Minister of Education Hon. Vance Amory thanked the organisation on behalf of the School and the people of Nevis and noted that the occasion had brought attention to that fact that shade house technology could meaningfully assist the island in its agricultural pursuits.

The Premier and Minister of Education, who is also the island’s Minister of Finance, explained that the Nevis Island Administration (NIA) wanted to see the island’s young people become more motivated and involved in productive enterprise and they should take advantage of the technology and benefits now available in agriculture. 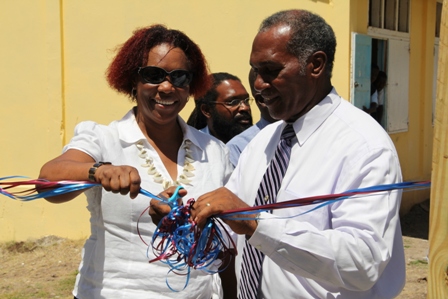 “If ever there were a productive enterprise in which they [youths] could become involved and take benefit, not just from the ability to grow things using the technology but also to benefit themselves as consumers of their own produce and also developing the agri- business aspect of that venture, I think agriculture is the most likely candidate,” he said.

Mr. Amory used the opportunity to urge teachers and parents to encourage their students and children to become involved in agricultural production and with the use of modern technology they could reap numerous profits.

He explained that the IICA representatives had indicated their willingness in assisting the Administration in its quest to invest in as many green houses as possible on Nevis. He added that an increase in the number of green houses would create a total transformation, improvement and maximisation of the output from agriculture for the benefit of the island’s people.

“Mr. Merchant assures me that we can have a market in St. Maarten. They are more industrialised than we are; they don’t have the space for agricultural production. 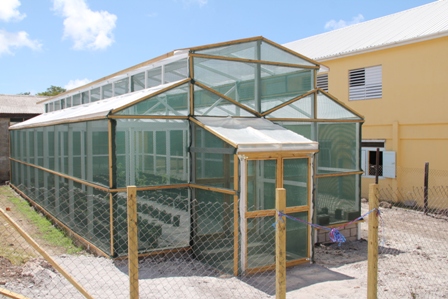 “We believe that if we can engage our people, beginning with our young people and those who are already involved in agriculture in this business, that the investment will pay tremendous dividends and give new words to them by working the technology, working smart and just working hard,” he said.

The green house was the second facility handed over to the Ministry of Education on Nevis. The first was handed over late 2012 for use by agriculture students of the Gingerland Secondary School.