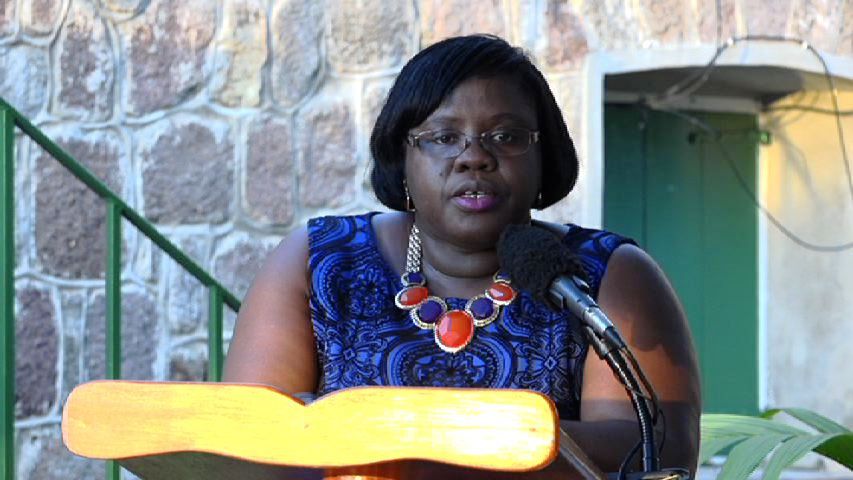 NIA CHARLESTOWN NEVIS (January 13, 2015) — Beneficiaries of the Alexander Hamilton Scholarship Fund were urged to use Nevisian born Alexander Hamilton’s experience, to inspire them to make a positive and progressive impact on their island and the world at large.

The advice came from Junior Minister responsible for Social Development Hon. Hazel Brandy-Williams while she delivered the feature address at the annual Alexander Hamilton Scholarship Fund Tea Party 2015.The fundraising event was held in Charlestown on January 09, 2015, at the site of Hamilton’s birth place in 1757.

“Opportunities abound,” she told the students, “you have an enabling environment and like Alexander Hamilton, you have a Nevisian nationality and a sharp intellect. Nevis has a very high literacy rate, perhaps the highest in the region. I make this comparison with Hamilton, although I am cognizant of the fact, that he himself was humble enough to claim that the genius for which he was credited came from hard work.

According to the Minister, the Alexander Hamilton Scholarship Fund was established in 1966 by the Trott Family. However, although it experienced a few years of dormancy, many students had benefited from it.

She paid homage to Amber Trott and his family for their foresight in founding the Scholarship Fund which she said had positively impacted many lives on Nevis.

Mrs. Brandy-Williams also extended gratitude to the Nevis Historical and Conservation Society (NHCS) and the Department of Community Development for their partnership in seizing the opportunity to continue the Fund which continued to enhance student’s opportunities for educational success.

The Social Development Minister encouraged past beneficiaries of the Fund to make contributions to ensure continuity that would help a larger pool of deserving students.

“I would also like to see, in the ensuing years, students from the private secondary school benefiting from this Fund as well. Much can be achieved from the simple principle of pooling our financial resources to assist deserving students,” she said.

The Tea Party is hosted by the NHCS to celebrate Hamilton’s birthday and to highlight the son of the soil’s accomplishments. He left Nevis at a tender age and later became a lawyer. He subsequently became the first secretary of the US Treasury on September 22, 1789.

By virtue of that position, he became President George Washington’s most trusted aide and became the chief architect of the US Constitution. In addition, Hamilton created the American economic system. He founded the Investment System and founded the Bank of New York. In addition, he founded the US Coast Guard and the US Navy among his accomplishments.

Other remarks came from Executive Director of the NHCS Evelyn Henville and Director of Community Development Janette Nisbett-Meloney. The chairman was Permanent Secretary in the Ministry of Social Development Keith Glasgow.