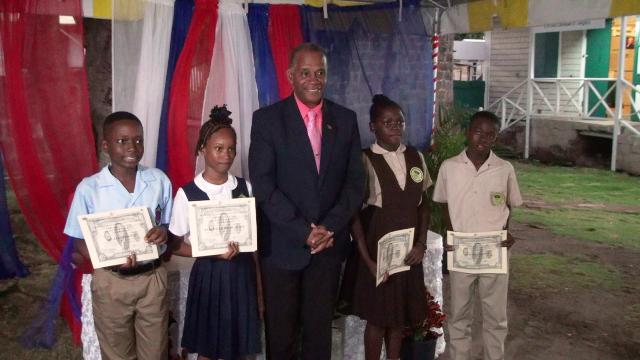 NIA CHARLESTOWN NEVIS (January 23, 2020) — Hon. Eric Evelyn, Minister of Social Development in the Nevis Island Administration (NIA) believes that students who are the recipients of Alexander Hamilton Scholarships should educate others about Alexander Hamilton, a born Nevisian who later left his mark in the United States of America.

The minister made the comment recently at a Alexander Hamilton Tea Party hosted by the Nevis Historical and Conservation Society (NHCS) in collaboration with the Department of Community Development, at the Alexander Hamilton Museum grounds.

“I would encourage our students to, in some way be the torch bearers of educating persons more about Alexander Hamilton.

According to a report on the scholarship programme from the Department of Community Development in the Ministry of Social Development, which is administering the Alexander Hamilton Scholarship Fund, at the start of 2019 there were 16 students enrolled in the programme.

This year four recipients were added to the scholarship programme namely Ms. Kaya Williams-Mulraine and Mr. Jae-Ele Swanston from the CSS and Ms. Noella Maynard and Mr. Stephan Leader form the GSS.

Alexander Hamilton rose from humble beginnings to become a founding father of the United States, Chief of staff to General Washington, first US Secretary of the Treasury one of the most influential interpreters and promoters of the American Constitution.  He was a lawyer, military leader, political scientist, journalist and a government official.