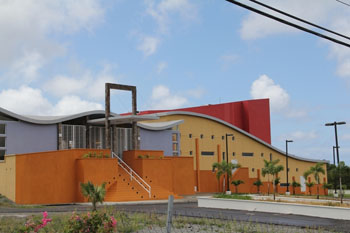 “If this is the apex of our achievement, if this is the symbol of Nevisian endeavor, of Nevisian hope for the future, if this is the idea that will give direction, ambition and aspiration to the people of Nevis, what will we call this centre?” posed Premier Parry as he delivered the Feature address to mark the opening of the centre on Saturday, April 28.

Addressing a charged audience of hundreds of Nevisians and Kittitians that included the Governor General His Excellency, Sir Cuthbert Sebastian, Prime Minister of St. Kitts-Nevis, the Right Hon Dr Denzil Douglas and the resident Taiwanese Ambassador to the Federation, His Excellency Miguel Tsao, Premier said to roaring cheers: “Certainly not Joseph Parry!”

“I am saying to you this afternoon whether (Dr Simeon) Sim Daniel wants it or not, if the people of Nevis demand it, he must surrender to the people of Nevis,” said Premier Parry. “He was the first outstanding political father of this country and the Nevis Reformation Party must be given the honour of honouring him.

“He cannot have the airport (named after Hon Vance Amory who was the sitting Premier when it was named), but he can have the Performing Arts Centre, which will be far more to the people of Nevis than any airport. Therefore, join with me and demand that he get up off his bed and accept this honour.”

Hon Parry revealed that before the opening of the centre, he had brought three stalwarts of post Independence Nevis and Former Ministers in the Nevis Reformation Party government, Mr Uhral Swanston, Mr Arthur Evelyn and Mr Phinehas Griffin to preview this edifice.

“For me, you see, it (the centre) is symbolic of the outstanding achievements of these men,” observed Parry. “What greater tribute of human endeavor can you give to these selfless political giants? May I repeat this Centre is not just about drama, dance and music. It is about human dignity, achievement, the purest form of patriotism.”

While the Nevis Performing Arts Theatre marks the end of a dream Premier Parry informed that it is a beginning of the signs of things to come, and of a new dream that reaches to the stars.

He explained that the new dream is one that tells Nevisians that their agriculture will bloom into a modern sector that will feed the people, and one that tells them that they will change the face of Nevis with financial services; that will have diversity in tourism and one that will underpin all those with the power of geothermal energy.

“The Prime Minister has reported that he met certain persons in Washington,” reported the Premier to further wild cheers from the audience. “We will move forward and we will have Geothermal energy here and we will change the face of Nevis, it will happen and this is a new dream of the people of Nevis. It is a new dream of the Government of Nevis, but I want to say to you, we must not forget those who dreamt before us and those who achieved.”

As he opened his address, Premier Parry said they had a great financial input from Taiwan and the Government of Nevis. “But I must say that there was a time when we seemed to be out of funds and I went to St. Kitts and spoke to the Rt Hon Denzil Douglas and he made available to me a sum of $3 million to help us complete this edifice,” stated Parry.

At the official opening ceremony of the Nevis Performing Arts Centre, the theatre was named after Nevisian musical icon, Herald Michael Sutton, who died in 2007. In eulogizing him in presence of his family that included his father Mr Cecil Sutton and mother Mrs Sutton and his siblings, Premier Parry said that Herald Sutton was “the greatest Nevisian musician who lived and died on Nevis.” 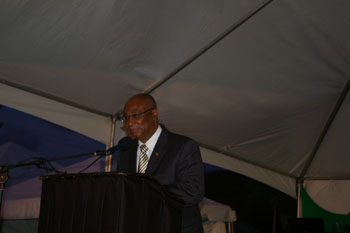 “Today the Theatre will be named in Michael Herald Sutton’s honour,” said the Premier. “Herald was a musical genius. His expression through Jazz, Blues and Calypso was untouchable on Nevis. Had he lived, I know not what worlds he would have conquered. Just to say when Herald played it gave meaning to Shakespeare’s words ‘If music be the food of love, play on’.”

Premier Parry appealed to the young people of Nevis who were present at the opening ceremony to be inspired by Herald Sutton and aspire to reach his standard. “You must walk the walk and seek only to walk with the best. Yes, Herald walked, and he walked with the best. Let us embrace him,” said the Premier.

During his speech Premier Parry saluted all Nevisian performing artistes and called them out by name and the roles they played. He thanked the Taiwanese government for providing the funds and those who built the edifice and said that people will identify it as a land-mark of what they have achieved and see it as an inspiration as they climb the heights of excellence.