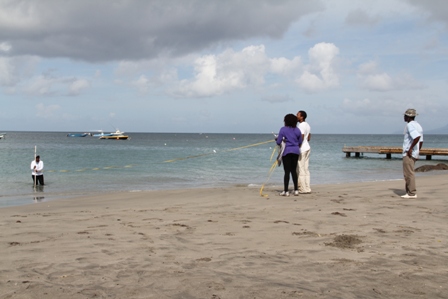 “What people, the Department of Planning and the government, over the years have been interested in are the changes in the main beaches on Nevis…so there can be comparisons. So when we speak about beach erosion or sand mining, any issues like climate change, we can be well informed because the data is there.
“Generally we have lost beach, definitely in the Pinney’s Beach area. There were a number of palm trees, apart from the disease [the lethal yellowing] which has destroyed or caused the death some of the palm trees, some have been lost to storms. They are no longer there as markers so we have to re-establish some new points,” he said.
Pemberton explained that the project which originally started during the 1980’s was put on pause about six years ago. He said data collected, up to that point in 2007, reveals that some of the island’s beaches had experienced some seasonal erosion.
“It showed that there was a considerable amount of erosion on most of the beaches. On some, there has been a little bit of accumulation but then what happens is that it is seasonal. So at some times of the year, you come here probably around December toward January then the beach will not be so wide but it would be wider at the southern end, so what you do, you attract seasonal changes. 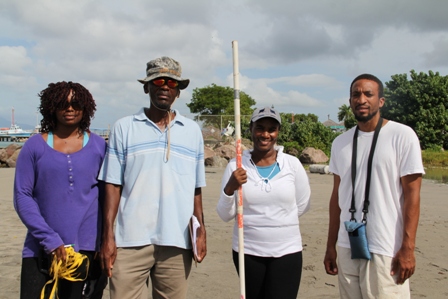 “What you should also do is immediately after a storm, if there is a major storm, you check. You take the beach profile. In another three months, you will also check it again to see what changes have been made, whether the beach has recovered or that there has been no change,” he said.
Also participating in the Beach Profiling Project are Physical Planning Officer in the Department of Planning Thema Ward, Geographic Information Systems Officer Joel Williams, and Environmental Officer Claudia Walwyn.