Premier of Nevis Hon. Vance Amory alights from an aircraft at a ceremony at the Vance Amory International Airport in Newcastle, to mark the inaugural launch of Tradewind Aviation’s daily nonstop services from San Juan, Puerto Rico to Nevis
NIA CHARLESTOWN NEVIS (November 04, 2013) — A commitment to attract additional air traffic to the Vance Amory International Airport at Newcastle was realised on November 2nd, 2013, when Tradewind Airlines launched its inaugural nonstop flight to Nevis from San Juan, Puerto Rico.
Premier of Nevis Hon. Vance Amory, who was on hand to witness the event, in brief remarks welcomed the new service and described the connectivity as an important ingredient in the development of Nevis.
“I want really to say how very pleased I am to have the opportunity to welcome Tradewind service… I think those who are in the Tourism Industry and those who are on island recognise the importance of having connectivity to move our people in and out and if we think the tourism industry is the driving industry for our development, then airlift is the driving force for the development of tourism.
“So we have this opportunity where Tradewind has stepped in to give us additional capacity, additional opportunity to increase the airlift which is so necessary,” he said.
Mr. Amory explained that in earlier discussions with hoteliers on Nevis, they indicated that their biggest challenge had been airlift, which in his view, had clearly affected an acceptable level of the destination’s tourism arrivals. 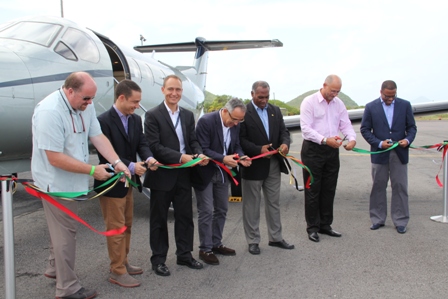 Notwithstanding, the Premier contended that with the high level of promotion that the island’s tourism officials had embarked on and the added capacity of Tradewind Aviation augured well for the quality of service for visitors to Nevis.
He described the new relationship with Tradewind as the start of a good thing and believed it would be a successful venture for the people of Nevis, visitors and Tradewind Aviation.
“I do think we are into a good thing and it’s going to be a success both for Tradewind and for Nevis and for all who want to do business here,” Mr. Amory said.
Meantime, the Head of the NIA also spoke to potential business that the airline could receive due to its service to Nevis. He noted that there were persons on the island who travelled southward but were often displaced by other airlines.
“I have even begun to think of what other services in terms of moving the people of Nevis southward because we are aware that with Liat, we have had some challenges and it has caused some dislocation for our people [and] the ability to move pretty quickly or easily out of Nevis to Antigua [and] to do business south and with a pretty large population of other Caribbean nationals who need to move back to their countries occasionally for vacation. I think this is a possibility which could be seen as useful for Tradewind,” he said. 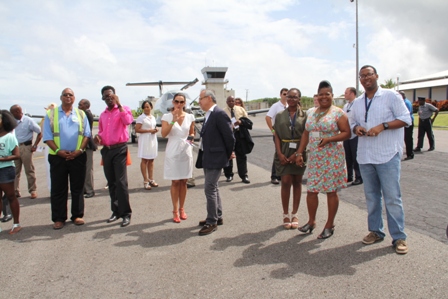 In conclusion, Mr. Amory thanked all the stakeholders who had help to persuade Tradewind Aviation to commence its service to Nevis.