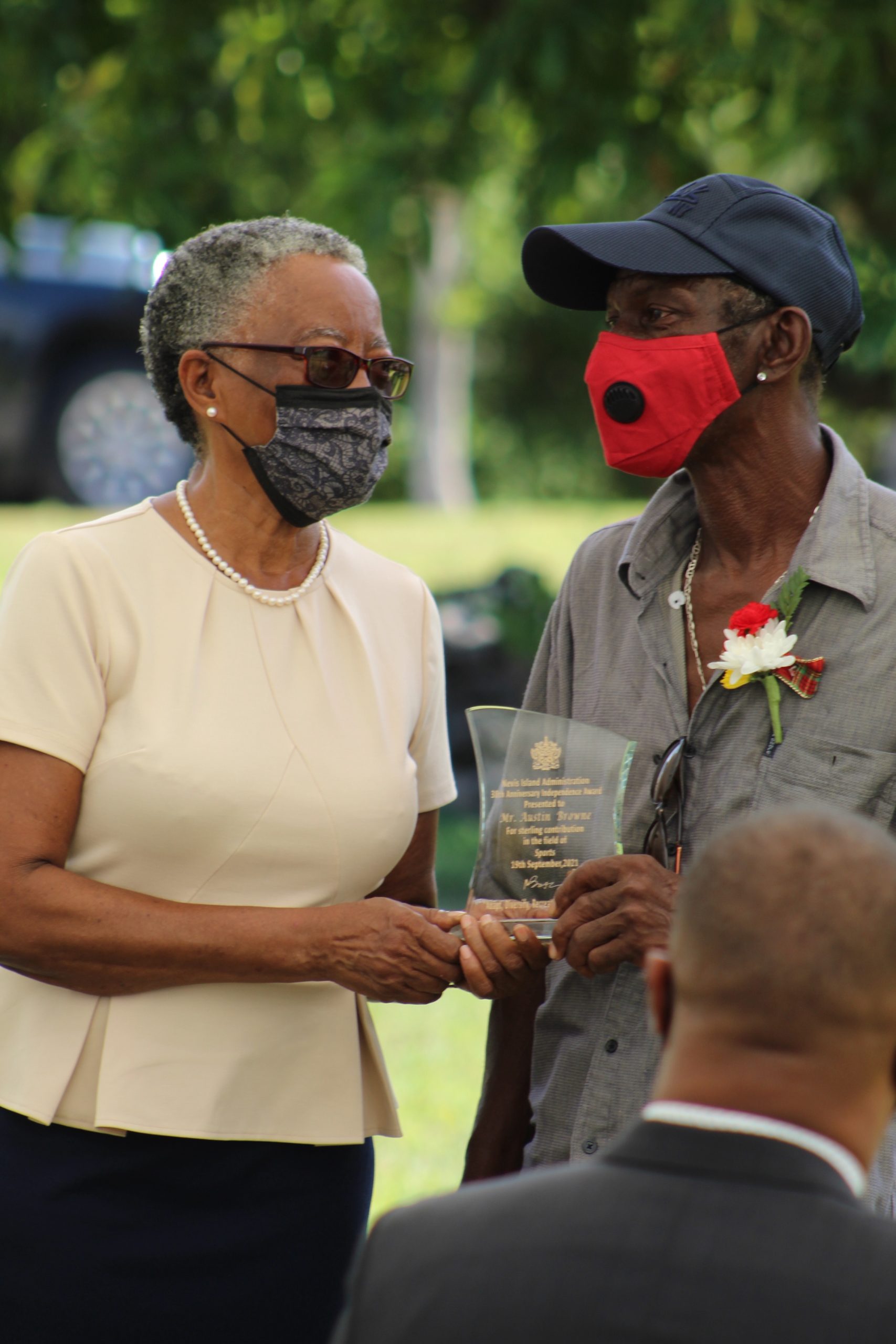 NIA CHARLESTOWN NEVIS (October 01, 2021) –– Mr. Austin Browne’s contribution to sports has earned him a place in the 11 persons on Nevis honoured during the 38th Anniversary of the Independence of St. Christopher and Nevis.

The Brown Hill villager who was described as a quiet, unassuming, humble man was presented with a plaque by Her Honour Mrs. Hyleeta Liburd, Deputy Governor General in Nevis at an Awards Ceremony at Government House on September 20, 2021.

According to his profile, over the years Mr.  Browne made a name for himself in cricket as a top-class opening batsman, a leg spin bowler and an outstanding keeper and fielder. He made his debut playing cricket for Brown Hill in 1974. He was also instrumental with both bat and ball in Brown Hill’s two championship seasons in the 1990’s.

“Anyone involved in cricket played on the Brown Hill cricket field at the time can attest to the fact that Austin had a love for the game – always being the first to show up for matches with bat in hand. Mr. Browne’s debut playing for the Nevis Senior Cricket Team came in 1978 in a match against Montserrat. Though in this debut match, he didn’t score many runs, he took nine impressive catches.

“Austin’s selection to the Nevis Cricket Team can be considered almost accidental as he was not initially selected to play for trials but showed up at Grove Park along with Harvey “Pumby” Stapleton, who had made the pick for to play for trials, just to observe.  As fate would have it, fewer players than were expected showed up that day and Austin was given a chance to play on one of the teams taking part in the trials to make the Nevis team.  Austin scored in excess of 100 runs in that match and the rest is history,” the profile stated.

He performed as a champion batsman in the wicket even facing renowned bowlers like Sir Curtly Ambrose of Antigua. One counterpart of Mr. Browne recounts that he was such a talented batsman, that he would openly challenge any pace bowler that he encountered and would consistently deliver on his promise to turn their pace into runs on the board.

However, his love for sports did not only entail cricket but football as well.

He played football for Brown Hill, and played a significant role in a championship win and many top three finishes in the 1990’s.  For four seasons, Mr. Browne represented Bath United Football Team – his crowning moment came when he scored the winning goal to win a championship for the team.

Mr. Austin Browne was and still is a father-figure to many sports-men of Brown Hill.  “Coincidentally, he is affectionately referred to as ‘Daddy’ by all who had the privilege of being mentored by him,” the profile said.