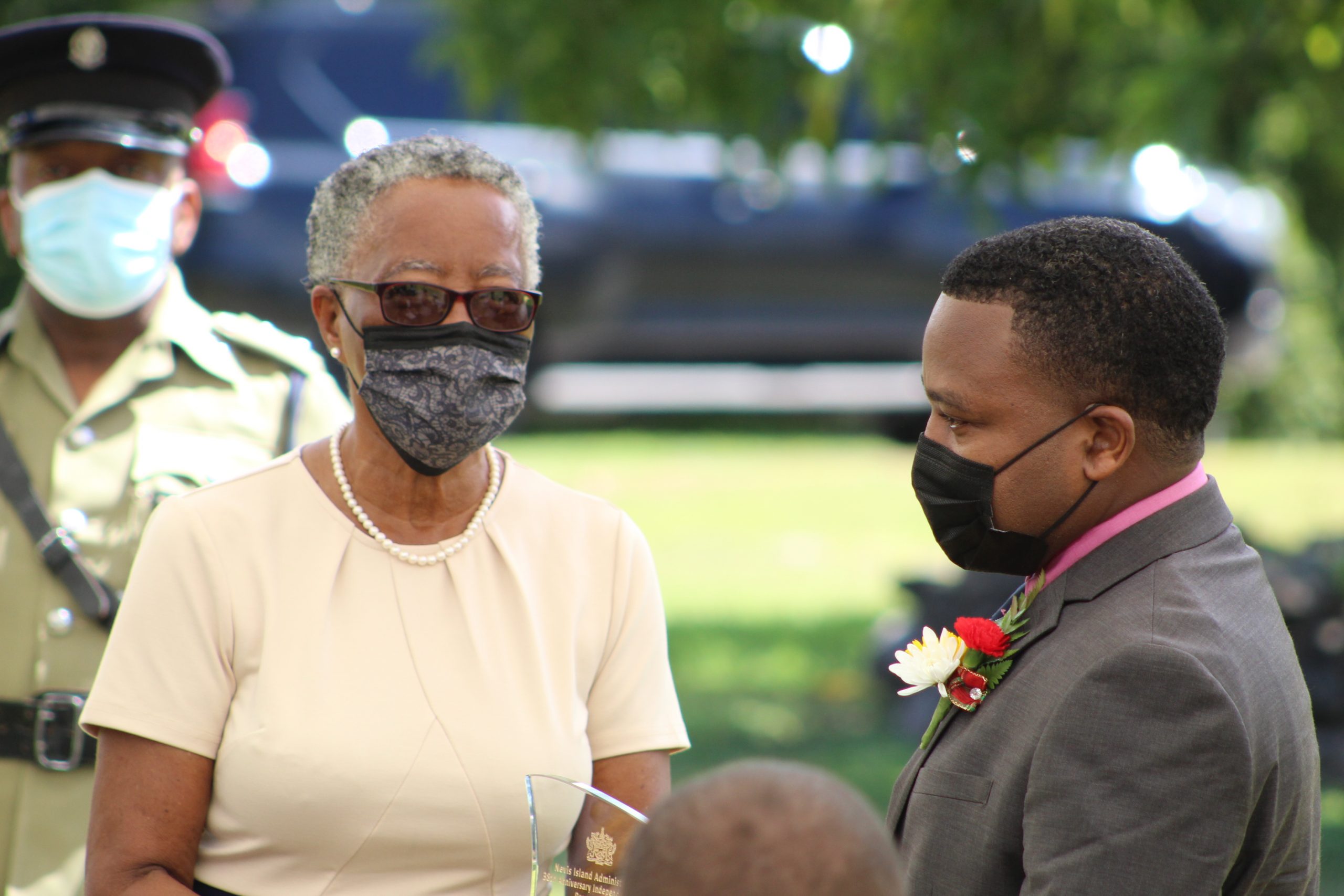 Her Honour Mrs. Hyleeta Liburd, Deputy Governor General of Nevis, presenting a plaque to Mr. Troy McKoy at an awards ceremony at Government House on September 20, 2021, for his contribution to Business on Nevis on the occasion of the 38th Anniversary of Independence of St. Christopher and Nevis

NIA CHARLESTOWN NEVIS (September 28, 2021) — Mr. Troy McKoy of Brown Pasture was awarded for his 25-year contribution to the Business Sector on Nevis, as part of the 38th Anniversary of Independence of St. Christopher and Nevis.

He was one of two persons who were awarded in the field of Business and was presented with a plaque by Her Honour Mrs. Hyleeta Liburd, Deputy Governor General on Nevis, at an awards ceremony at Government House on September 20, 2021.

From an early age Mr. McKoy knew he wanted to become a business man. However unknowingly his first step toward that goal presented itself when in 1989, a friend and neighbour Mr. Michael Jones of blessed memory gave him a hair clipper and asked him to cut his hair.

According to Mr. McKoy’s profile, his neighbour was impressed with the quality of the haircut he received since it was the first time his young neighbour had given anyone a haircut.

Not too long after, Mr. McKoy began cutting Mr. Jones’ brothers’ hair, the hair of his own siblings and eventually that of friends. Word spread and soon villagers in the Brown Pasture and Cole Hill areas began flocking to Troy’s yard to get their hair cut.

Later on, after he left school and was devoid of a formal job, the enterprising Mr. McKoy used his time to perfect his skills in cutting hair and began charging his clients a small fee.

“It soon became apparent that barbering had become his job and that he could make a career of it. As word spread throughout Nevis, Troy then learnt that to have returning customers, he had to develop his customer relations skills and be willing to work long hours.

From working in his mother’s yard under a mango tree, he knew that for him to get the business to advance and to attract people from all walks of life, he needed a proper barbershop. The business grew to the point where he was forced to open early at mornings and close late at nights,” the profile said.

After spending almost 20 years in the small barber shop and due to the overwhelming support, Mr. McKoy saw the need to expand his business, employ an assistant, provide better accommodations, and to offer better customer experience.

He subsequently moved from his original shop in his mother’s yard to a space that was available a few metres away to erect his shop.

After 25 years in the business, Mr. McKoy has learnt that hard work, perseverance and good customer relation skills can bring success.