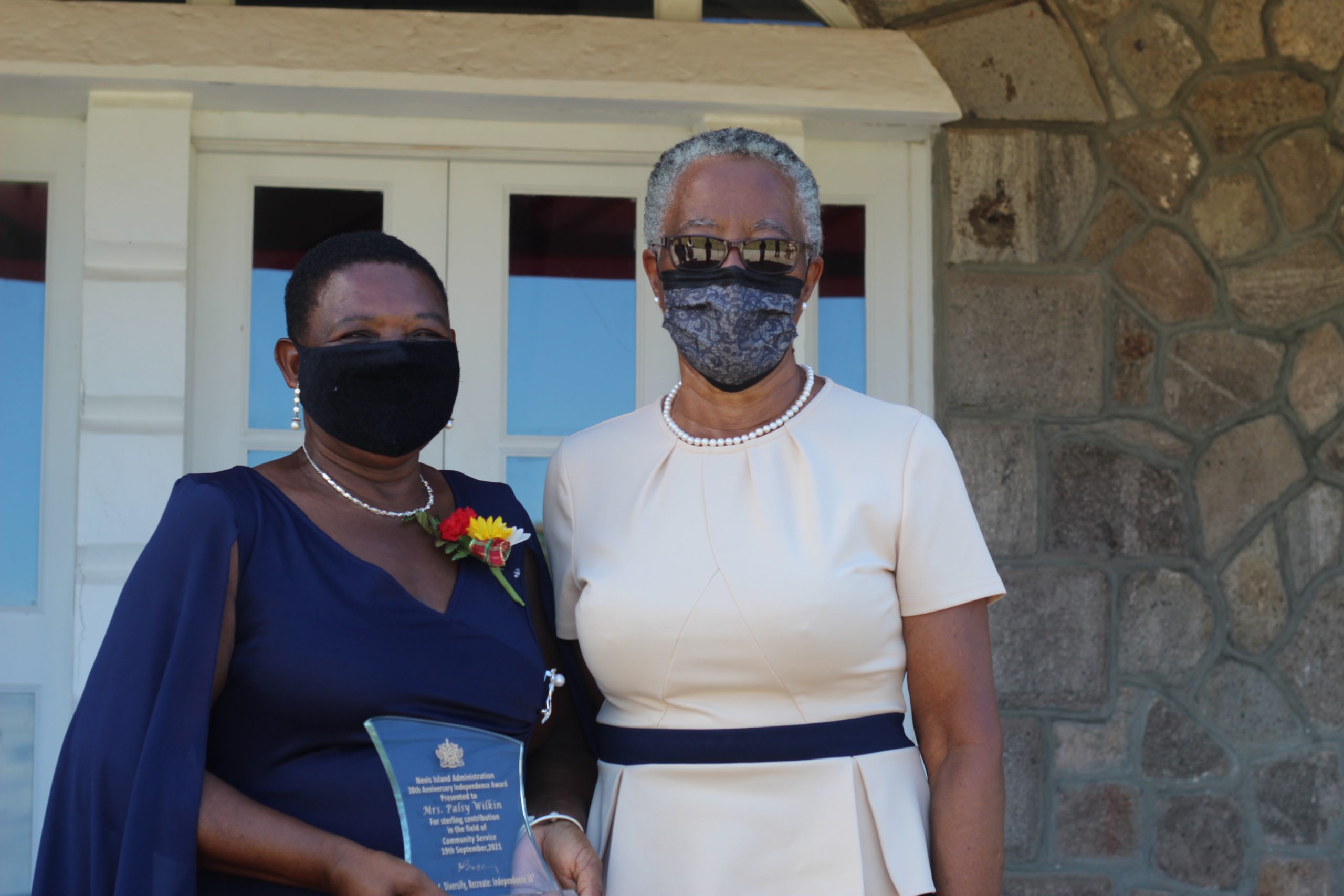 (L-r) Mrs. Palsy Wilkin with Her Honour Mrs. Hyleeta Liburd, Deputy Governor General on Nevis at the end of an Awards Ceremony at Government House on September 20, 2021. Mrs Wilkin was one of 11 Nevisians presented with a plaque by Her Honour for their sterling contributions in St. Kitts and Nevis on the occasion of the Federation's 38th Anniversary of Independence

NIA CHARLESTOWN NEVIS (September 27, 2021) — Mrs. Palsy Wilkin nee Brandy was one of 11 Nevisians honoured on the occasion of the 38th Anniversary of Independence of St. Christopher and Nevis for their contributions to the development of the federation.

Mrs. Wilkin who was an educator for 44 years was presented with an award by Her Honour Mrs. Hyleeta Liburd, Deputy Governor General on Nevis during an awards ceremony at Government House on September 20, 2021.

In her profile, she was described as one of Nevis’ unsung heroes, who believes in giving her best without expecting any accolades to be bestowed on her.

Born in Brick Kiln Village to the late Cyril and Susana Brandy, Mrs. Wilkin is the third of six children. She was born and raised in a close-knit family and received her early education at the St. James’ All Age School, commonly known as the Old White Hall School, up to the College of Preceptors level.

She entered the Charlestown Secondary School in 1972 at the 5th Form level and graduated in 1973, having successfully passed four GCE subjects.

Her world of work began with a brief tenure at the General Post Office in Charlestown before she entered the teaching profession. Her teaching career began in 1974 at the St. Thomas’ Primary School under the headship of retired Education Officer Mrs. Violet Nicholls. Mrs. Wilkin subsequently completed three years as an Untrained Teacher prior to attending the St. Kitts-Nevis Teachers’ Training College in 1977. She graduated two years later with a Certificate in Education from the University of the West Indies.

While at college, Mrs. Wilkin taught at the Basseterre High School and Girls School respectively, where her teaching skills were assessed as part of the requirement for certification.

On her return to Nevis, she joined the staff of the Combermere Primary School, which was later renamed the Violet O. Jeffers-Nicholls Primary School, before she was transferred to the St. James’ Primary School where she taught for the next 20 years. During her tenure there she had the opportunity to engage in multi-grade teaching while assisting younger teachers with their classes, and taught all grades at the primary level.

During summer in 1980 and 1983, Mrs. Wilkin was trained as a “Trainer of Trainees” at the Antigua State College and the University of Manitoba in Winnipeg, Canada. This Advanced Regional Training in the teaching of Reading was offered by the Organisation for Cooperation in Overseas Development (OCOD) and sponsored by the Canadian International Development Agency (CIDRA). She subsequently worked as Tutor and co-tutor for Reading with OCOD for several years.

In 1999, Mrs. Wilkin represented Mrs. Hyleeta Liburd, then Principal Education Officer (PEO) as her designated OCOD liaison person at a Strategic Planning Session in Winnipeg. She received training in Needs Assessment and Results Based Management Planning.

Later from 1984 to 2014 she taught the Prospective Teachers Course and the Induction Programme for new teachers. She also facilitated workshops for Primary School Teachers at all Grade levels, sharing her knowledge and expertise in best practices in the teaching of Reading.

Mrs. Wilkin enrolled with the University of Miami through a special arrangement made by the then Nevis Island Administration (NIA). On completion of her studies, she gained a Bachelor of Science Degree in Education with special emphasis on Early Childhood Development in 1993.

During the summers of 1999 and 2000 she pursued training in the “Theory and Practice of Teaching Dyslexic Pupils” at the Samuel Jackman Prescod Polytechnic Center, in Barbados now the Samuel Jackman Institute of Technology with sponsorship from the Caribbean Dyslexia Association and The British High Commission.  She was awarded a certificate in “Teaching Dyslexic Pupils-Specific Learning Difficulties.”

In 1999, Mrs. Wilkin was promoted to the position of Reading Resource Officer at the Department of Education with the mandate to provide Resource Services to the Primary Schools in Nevis.

Her responsibilities included, but were not limited to, Assessment and Diagnostic Instruction of students, Staff Development Sessions, working with teachers one-on-one and conducting training workshops for focus groups of parents and teachers.  In 2000 she was appointed as Education Officer with responsibility for Reading Resource.

During the period September 2002 to July 2003, Mrs. Wilkin pursued training as a Reading Recovery Tutor at the University of London – Institute of Education. In part fulfilment of the programme, Mrs. Wilkin undertook the task of overseeing two Reading Recovery Labs, one at the Irish Town Primary School in St. Kitts and the other at Marion Heights in Nevis.

Training was done at the Reading Recovery Centers and monitoring was done at all 15 schools.  For five years Mrs. Wilkin travelled to St. Kitts two to three days per week. She worked at schools including St. Paul’s, Saddlers, Cayon, and Tucker Clarke Primary.

Following the implementation of The Reading Recovery Programme, Mrs. Wilkin submitted her report to the University of London which was the final requirement to completing her Masters’ Degree.  In 2008 she graduated with a Master’s Degree in Literacy Learning and Literacy Difficulties.

In 2009 Mrs. Wilkin enrolled with The University of The West Indies Open Campus and satisfactorily completed the requirements of the Certificate in Supervisory Management Course, and received certification in January 2010.

She was subsequently appointed to the post of Principal Education Officer at the Department of Education from September 2013, with responsibility for all Pre-schools, Primary and Secondary Schools in Nevis.  She held the position until her retirement in August 2018.

Notwithstanding all her achievements, the most rewarding part of her career has been those years spent working the hardest to teach children on a one-on-one basis and training teachers and parents in St. Kitts and Nevis.

“She has a special place in her heart for all the students in the Federation who have difficulties in reading. Her mantra that all children should be able to read is best demonstrated when she attends graduation ceremonies and hears the names of students with whom she worked in the Reading Recovery Programme graduating with one and up to eight CXC subject passes.

“She has shed joyful tears on these occasions as it signifies that child can learn given the appropriate instruction in an environment that is conducive to learning,” the profile said.

Mrs. Wilkin is described as a family-oriented person who has been married to Mr. Pearlievan Wilkin for the past 34 years. The mother of two children, Asuredé and Akil, with the help of her husband, she has been able to balance her dedication to her family and her commitment to her career.