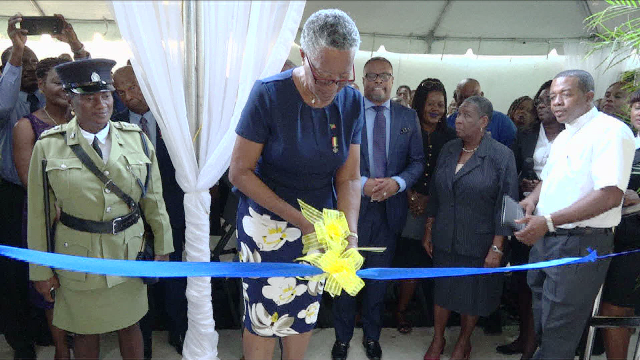 : Her Honour Hyleeta Liburd, Deputy Governor General on Nevis, cuts the ribbon to commission the new building which will house the Nevis Island Administration’s Treasury Department on January 30, 2020

NIA CHARLESTOWN NEVIS (January 31, 2020) — The building which will house the Treasury Department of the Nevis Island Administration (NIA) was officially commissioned on Lower Happy Hill Drive in Charlestown on January 30, 2020.

Hon. Mark Brantley, Premier of Nevis, who is also the Minister of Finance in the Nevis Island Administration (NIA), described the event as an historic one, and referred to the building as one which represents the spirit of the people of Nevis.

“When the old building burnt down, many of us would have despaired but again Mr. [Vance] Amory and Mr. [Colin] Dore championed this vision of a new building and I believe that when this building is unveiled, clothed as it is in many colours, that it will become for Nevis a landmark.

“No doubt it would have transformed Charlestown because you can see it from almost anywhere you are in town…The reason why I think this building as a landmark is going to be important because to me it represents the spirit of the Nevisian people,” he said.

Mr. Brantley noted that from time to time, Nevis had suffered calamity but even as a small island, it somehow beats the odds and the new building is symbolic of that spirit.

“That spirit of renewal, that quintessential Nevisian spirit, and so every time we pass by and we see this building I want us to remember from whence we came. Remember that this used to be ash. That is what was there, and that we have been able to emerge from those ashes with an edifice that is now truly a landmark for Charlestown…

“We wanted something that was representative of our island and of our people and again I say thank you to all those who were involved,” he said.

The finance Minister lauded the relationship between the NIA and the Sugar Industry Diversification Foundation (SIDF) which contributed EC $6.5million for construction of the facility.

“I thank God for the vision and the wisdom that led us to a place that the people of Nevis can point to something. So every time you drive and walk in Nevis say ‘That’s the SIDF building’. I have no problem with that. Point to something that we could say that we have achieved and obtained as a consequence of this very important relationship,” he said.

Meantime, Dr. Robertine Chaderton, Chairperson of the SIDF Board of Councillors, in her remarks said she is pleased to see the project come to fruition and wants to let Nevis know it does not stand alone.

“A little more than 18 months ago I stood with my fellow Board members of the Sugar Industry Diversification Foundation (SIDF) on the ground floor, a concrete platform with some pillars and wondered when the finished product in the picture shown to me would become a reality.  I am indeed pleased with what has been accomplished.

“The Treasury Building represents the financial strength of a country. While each part of the Federation would like to stand on its own two feet, the SIDF Board wants Nevis to know that it does not stand alone. Hence, we have contributed to several projects here in Nevis. For the construction of the Treasury Building, SIDF contributed EC$6.5 million,” she said.

Dr. Chaderton described the building as being a credit to all who helped to bring it to fruition from the visionaries to the contractors and the NIA well.

“Good facilities and good infrastructure are important for producing good economic outcomes. It is a landmark in Charlestown, and provides the NIA with an impressive home from which to conduct its financial affairs.

“The SIDF Board wishes the NIA continued success. I trust the people of Nevis will accept the contributions in the spirit they were given,” she said.

Other remarks came from Hon. Vance Amory, Senior Minister and Minister of Nevis Affairs in the Federal Government; and Mr. Colin Dore, Permanent Secretary in the Ministry of Finance, who also chaired the ceremony.

Among those present were Her Honour Hyleeta Liburd, Deputy Governor General on Nevis, who cut the ribbon to the new building.