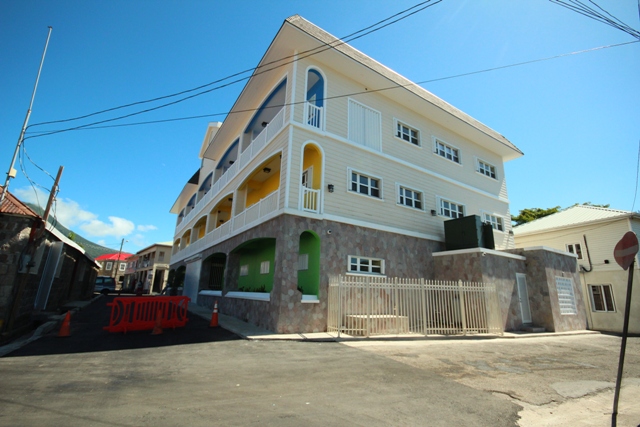 The new Treasury and Inland Revenue Department Building Complex in Charlestown on January 30, 2020

NIA CHARLESTOWN NEVIS (February 03, 2020) — Mr. Colin Dore, Permanent Secretary in the Ministry of Finance on Nevis, commended the staff of the Treasury Department and the Inland Revenue Department (IRD) for what he called their continued commitment and dedication despite of the difficult conditions in which they have operated during the past six years.

The Ministry of Finance official’s praise for the staff came while he delivered remarks at the Official Opening of the Treasury and Inland Revenue Department Building Complex in Charlestown on January 30, 2020.

“To the staff of both departments, many of whom are still with the departments today, I’m sure that you feel a great sense of gratitude having endured that tragic moment. We must commend you for your continued commitment and dedication to the department despite the difficult conditions under which you have operated over the last six years.

“We were determined to rise out and the expression of confidence in our ability to do so coupled with our mantra of being damaged but not destroyed enabled us to quickly resume our duty of service to the public. You must be commended,” he said.

The new EC$11.2 million facility, $6.5million of which was funded by the Sugar Industry Diversification Foundation (SIDF), was constructed on the site of the old offices which were gutted in an early morning fire on January 17, 2014. It was later determined at the end of a forensic investigation that the fire was an act of arson.

Mr. Dore referred to the new building as a symbol of determination that as a people, Nevisians can rise bigger and stronger out of any difficult or tragic situation that may confront them in their daily lives.

He impressed on all, the need to recognise the efforts and resources that were committed to the project and expressed hope that the improved working environment would serve to further motivate the staff.

The permanent secretary also used the opportunity to urge members of the public who would use the facility to exercise care.

“I implore you to exercise great care in the treatment of this public property as too often we are tempted to vandalize and graffiti structures especially public property,” he said.

The new building which will be occupied in the coming weeks is equipped with all the features of a modern facility. It has access controls at all points of entry, two elevators, two vaults and wheelchair access to facilitate persons with disabilities.

Mr. Dore spoke of the departments which would occupy the facility.

“It will host the offices of the Inland Revenue Department, the Treasury Department, and will also serve as the main hub of our government-wide Information Technology infrastructure.

“The total staff count to be relocated to this structure will be approximately 60 persons,” he said.

The new facility was the vision of Hon. Vance Amory, Senior Minister and Minister of Nevis Affairs in the Federal Government, who was the Premier of Nevis at the time of the fire; and Mr. Dore who held his same position at that time.