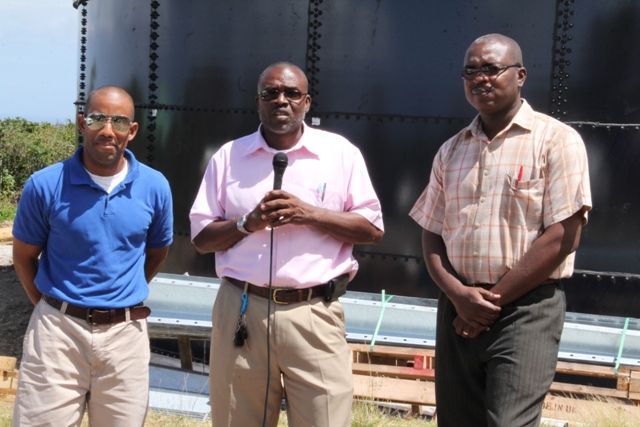 (l-r) Roger Hanley, Manager of the Nevis Water Department, Principal Assistant Secretary in the Ministry of Communication and Works Denzil Stanley with Permanent Secretary in the Ministry of Communication and Works Ernie Stapleton at Spring Hill where the second water tank is located
NIA Charlestown Nevis (March 12, 2014) – The Water Enhancement Project on Nevis funded by the Caribbean Development Bank (CDB) and the Nevis Island Administration (NIA) is well on its way, with the completion of a second water tank located at Spring Hill. The first was recently completed at Camps.
In an interview with the Department of Information on March 07, 2014, at the Spring Hill site, Denzil Stanley, Principal Assistant Secretary in the Ministry of Communication and Works gave an overview of the status of the CDB funded Project.
“This tank has the capacity of 500, 000 gallons it’s one of a total of six tanks under the project. [The] one at Camps which is already erected has a capacity of 300, 000 [gallons]. Then there will be four others: one at Morgan Estate, one at Fothergills, one at Maddens Estate and one at Stoney Hill. Those would come later on in the project.
“Also down at Camps we would have started work on a pump house that would assist or push water from Camps up to the Spring Hill site which would serve not only this area but as far away as the Four Seasons and Pinneys area. So points in between here and Charlestown, would have a greatly enhanced water supply so there shouldn’t be any issues in terms of water pressure in the supply to households from between here and there,” he said.
Stanley also stated that work on the other sites had advanced and the Department was at the moment awaiting material to continue the project.
“Works on the Morgan Estate site is pretty much advanced in terms of preparation for the tank site itself and at Maddens, the base has already been poured, just awaiting material for the erection of the tank,” he said.
According to Stanley, training with pipe laying for workers of the Nevis Water Department, would also form part of the Project.
“Part of the project involves the training of workers in the placements of the pipes. The technology or the process is somewhat different from what we normally do in terms of the connection. We are now going to be using what we call a Butt Fusion System where the pipes will be joined from end to end and so, in preparation of that process, there will be a training session to train workers in mastering the art of doing that,” he said.
Manager of the Nevis Water Department, Roger Hanley, added that during the project the Department would install over 100, 000ft of pipe that would range from ranging from 10, 8, 6 and 4 inches through an automated installation process which utilised electrical current to fuse the pipes together. 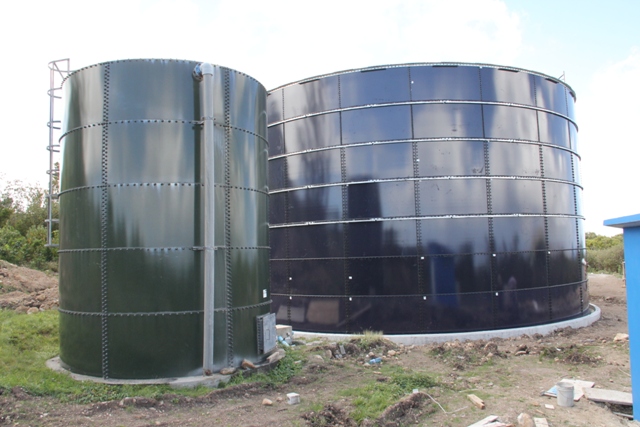 According to Hanley, the new piping system was designed to withstand extreme pressures and would be more resilient to varying ground conditions with a life expectancy of over 50 years.
Also present on the tour was Permanent Secretary in the Ministry of Communication and Works, Mr. Ernie Stapleton who disclosed that the pipe laying for the project was scheduled for April this year.
“The civil work proper for the laying of pipes which the Nevis Water Department is responsible for, is just about ready to start. We’re expecting some pipes to be on island this month as well as in early next month, April…there about.
“What we would do is to establish several locations where we can begin actual civil works. So the public could see persons on the road working as we lay pipes,” he said.