NIA-CHARLESTOWN, NEVIS (April 29TH, 2011) — Nevis’ Premier and Minister of Tourism, the Honourable Joseph Parry, was publicly applauded for the support and enthusiasm he exhibited toward his island’s tourism industry.

The words of appreciation, delivered by Chief Executive Officer [CEO] of the Nevis Tourism Authority [NTA] Mr. John Hanley, came recently at the NTA’s awards cocktail in celebration of its [NTA]10th anniversary.

Premier Parry, like many of the NTA’s allied partners, “collaborated remarkably well with the NTA,” Mr. Hanley said, adding that the collaboration had “strengthened the common goal of promoting Destination Nevis.”

The support and enthusiasm referred to by Mr. Hanley proved true in the Tourism Minister’s decision to host the establishment’s 10th anniversary awards cocktail and his donation of the acrylic awards that were presented to the honourees.

While relishing in the festivities surrounding his establishment’s 10th anniversary, CEO Hanley issued several challenges to Nevisians. The challenges, if accomplished, would demonstrate people’s dedication and thorough commitment towards the development of the island’s tourism product, he explained.

“As the NTA moves beyond its 10th year of existence, there is urgent need for diversification of our tourism product. 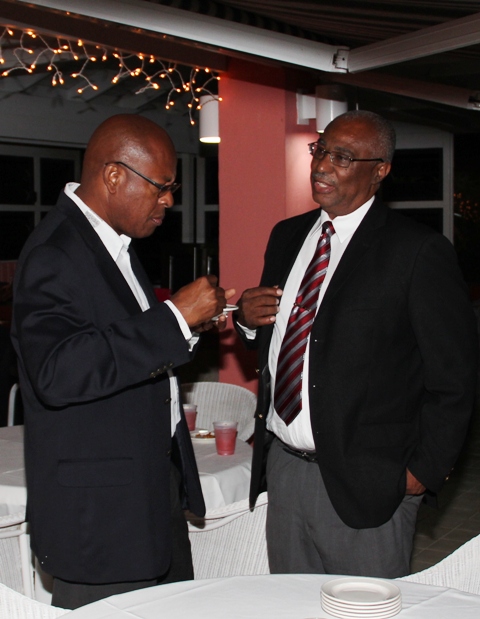 Premier of Nevis and Minister of Tourism the Honourable Joseph Parry conversing with Permanent Secretary in the Ministry of Finance Mr. Laurie Lawrence at the Nevis Tourism Authority’s 10th anniversary awards cocktail

“Increasingly, we recognise that we cannot afford to put all of our eggs in one basket – we must diversify, change and adapt or risk decline and stagnation,” he said.

“The advent of the Aman Resort, the proposed marina development at Cades Bay and the Charlestown Waterfront Development Project,” together with the support of sports tourism, he added, would improve tourism on Nevis.

The tourism official also appealed for maintenance of the island’s heritage sites and support of the craft vendors, agro-processors and small entrepreneurs.

“Tourism is the cornerstone and the backbone of the Nevisian economy,” he said, adding that the goods and services offered by local entrepreneurs “would expand and diversify the island’s tourism product base.”

Like Premier Parry in his address, Mr. Hanley underpinned the importance of strengthening the link between the Ministry of Tourism and the NTA. Such collaboration, he said, “is vital to strengthen capacity building and human resource development within the tourism sector.”

The Nevis Tourism Authority officially began operations on March 30, 2001 under the leadership of Ms. Helen Kidd.