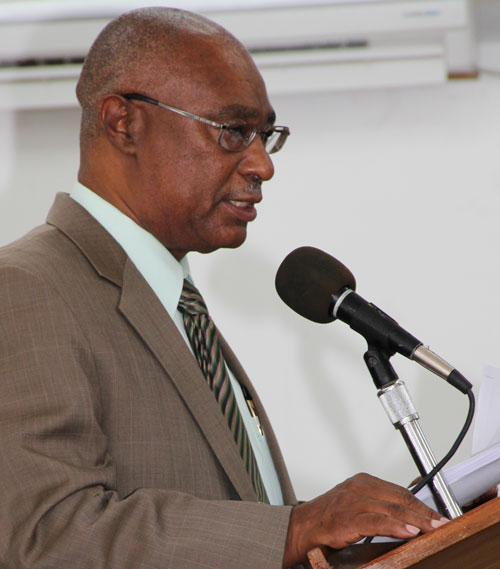 Premier of Nevis, Hon. Joseph Parry in the Nevis House of Assembly

Charlestown, Nevis (April 27, 2011) — The Nevis Island Assembly has approved a Resolution guaranteeing a US$57 million loan that is being sought by West Indies Power (Nevis) from the United States Government’s Export Import (Ex-Im) Bank for the construction of an 8.5 megawatt (MW) power plant in Spring Hill, Nevis.

Finance Minister and Premier, the Hon. Joseph W. Parry, mover of the Resolution, reflected that since the turn of the century, fluctuating oil prices on the world market have created greater interest in alternative and renewable sources of energy that were less dependent and independent of fossil (oil) fuel.

“This geothermal project is unprecedented in the eyes of the people of this part of the hemisphere, in the eyes of the people of CARICOM and the OECS and specifically for the people of St. Kitts and Nevis. It will not only impact on government’s revenues, but it will bring down the cost of energy on the island, it should impact on prices in the business sector, and it should serve as an attraction to businesses and certainly in terms of green energy and a green country, it will make Nevis an exceptional place in the world,” stated the Honorable Premier.

Energy Minister, Hon. Carlisle Powell stated that approving the Resolution, would unlock millions of dollars in financing for one of the most important projects in the history of Nevis. “Geothermal development is important for the two islands because it would help insulate them from the high and variable costs of distillate and reduce CO2 emissions. St. Kitts and Nevis would benefit from large savings in the region of US$159 million from geothermal developments on Nevis and an interconnection to St. Kitts. The savings are much higher than the increased cost associated with developing the plant and the interconnection and those were put at around US$100 million.”

Powell reminded detractors that the realization of the Geothermal Project will also open up a US$1 billion industry (larger than Tourism and Offshore Financial Services) in the export of electricity to neighboring countries including Puerto Rico. President Obama’s Task Force on Puerto Rico’s Status recently recommended “to advance discussions in the Caribbean region on the potential for subsea electrical interconnection under the Energy and Climate Partnership of the Americas, the Department of State, through a grant to the Organization of American States (OAS), should fund a pre-feasibility study to examine an interconnection between Puerto Rico and St. Kitts and Nevis.”

West Indies Power (Nevis) as disclosed that the geothermal generated electricity capacity stands at several hundreds of megawatts. CEO of WIPN Kerry McDonald says that in addition to the 8.5 megawatt power plant, the financing will also cover the cost for 8-miles of Cable to join the power plant from Spring Hill to the main grid. “In the next month, you will see several things happening: the Engineering and Procurement Construction Contractor will be opening their offices to begin construction of the site; building the well pad; geotechnical work; drilling components will be coming in; and by September, the bulk of the construction crews will arrive to build the power plant.”

Premier Parry was invited and will meet with Puerto Rico Energy officials to continue ongoing discussions of the export of electricity to Puerto Rico in early May.