NIA-CHARLESTOWN NEVIS (January 18, 2011) — The local media on Nevis has been called on to resist the urge to publish incidents of crime on their front pages and replace them with more positive events that occur in the community. That move Nevis’ Minister of Youth and Social Development Hon. Hensley Daniel contended, would change the message sent out to the rest of the island.

He was at the time delivering remarks at a small ceremony at the junction of Low Street and the Island Main Road in the vicinity of a public water cistern which had been transformed by Helping Our People Excel (H.O.P.E) Nevis in partnership with Hameron Services, as part of its anti crime initiative and to beautify Charlestown. The eye catching painted message on the cistern welcomed all to Charlestown. In recent times the cistern had become an eyesore and was subject to graffiti due to anti social behaviour among the youths.

“I would expect the newspapers now to take a paradigm shift and shift the crime and all the other negative elements off the front pages of the news papers and put this on the front of the newspaper so as we would say in local parlance, we would be saying to the young people ‘come out a dat and come ina dis’.

“I have been attending various types of functions, many of which have to do with anti social behaviour. When we speak to anti social behaviour we must speak of what is happening positively as well and here it is that HOPE Nevis is making a difference in changing the language you would see in Charlestown the island’s capital and I would hope that all our publicists and all our media houses would get the message that we are celebrating criminals in the country,” he said. 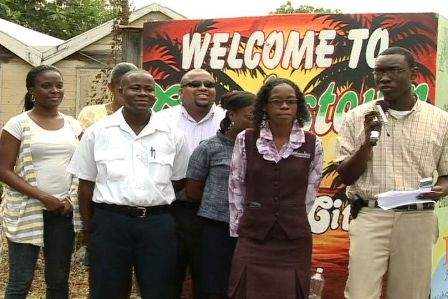 Mr. Daniel it was important that any positive action taken by the youth groups on Nevis and the partnership they forged with the private sector to achieve those goals be celebrated.

“Coming together in a powerful confluence all of these energies and I am saying the time has come in 2011 let us show the positive things that young people are doing,” he said.

The Minister said he was well placed to identify with those types of community efforts which formed part of a wider concept of community development. He noted that the NIA provided the opportunity for community organisations to partner with institutions private or non profit to be able to change the message. 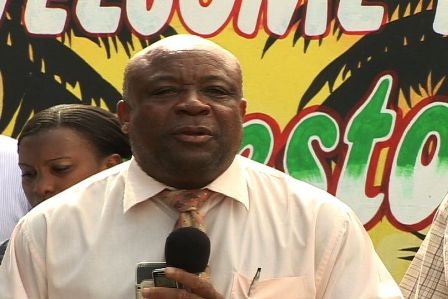 Meantime, Mr. Ron Weeks a member of the group who chaired the event said they had joined with the project’s main sponsor to dedicate the water cistern to the Nevisian public.

“This dam was done as a part of HOPE Nevis’ anti crime focus and also as part of our endeavour to beautify Charlestown and the rest of Nevis. So instead of being greeted with a dam full of graffiti entering into Charlestown, you are greeted by something that is beautiful and positive and I strongly believe that HOPE Nevis and Hameron Services should be given high recognition for bringing this project from a vision to reality,” he said.

Prior to the commencement of the project repair work was done by the Public Works Department while the painting was designed by artist Mr. Jimmy Simmons of Kustom Airbrush Graphics.

According to the group’s website, H.O.P.E Nevis Incorporated is a non profit organisation which started in August 2006. It was the brainchild of Rohan M. Isles, who along with a group of dynamic young men and women had a vision for the young people of Nevis.

That vision was simply to do all within their power to help Nevisians excel. It was a vision fortified by other likeminded civic citizens, who although they came from different backgrounds and had diverse beliefs, decided to band together for the common cause of advancing the interests of the Nevisian people.

“As a group of people who were discontent with the status quo, H.O.P.E Nevis Incorporated decided to launch a number of programmes in an effort to address the problems facing the Nevisian Community especially as it pertains to youth,” the group’s website said.