While folklore training programmes had already started in the schools, Mr. Byron said Nevisians could look forward to seeing an improvement in drama presentations as his department had contacted someone to facilitate drama training.

“We have been struggling for a long time with our drama programme. We have not been so successful to getting it in the schools as we would have wanted to, mainly because we suffered from the human resources,” he said.

The trainer, Mr. Byron explained, holds a degree in the performing arts with specifics on drama.

“[Drama] is an area that we want to go into fulltime and big time. We are hoping that that person is going to be able to train instructors and go into our schools, go into our communities and bring back drama and theatre arts to the level that it once was,” he said.

As a longstanding employee within the Ministry of Culture, Mr. Byron highlighted the importance of showcasing cultural artforms on Nevis. During his explanation, Mr. Byron challenged the Manager of the Research and Documentation Unit at NCDF Mr. Chesley Davis to join forces with counterparts on St. Kitts to “bring back” some of the island’s “rich traditions.” 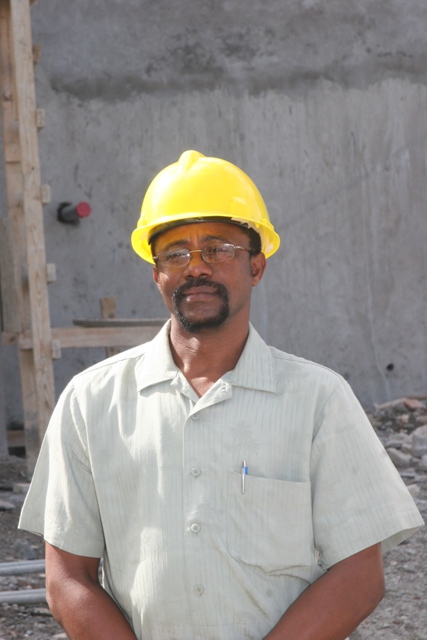 Manager of the Research and Documentation Unit at the Nevis Cultural Development Foundation Mr. Chesley Davis on site at the Nevis Performing Arts Centre

“I want to challenge our documentation man to work with Mr. Creighton Pencheon in St. Kitts who has done a lot of research on the tea meetings to have it perform here. There’s a lot of information that has been researched by Mr. Creighton Pencheon both in St. Kitts and Nevis and we can put a group of people together so that we can revive it: not revive to the extent where we can take it out to the other areas, but to let our people know that this is a rich tradition that we had in the past and that we can still continue to enjoy,” Chairman Byron explained.

Realising the “limitation in terms of human resources” at the NCDF, Mr. Davis said his department had developed a partnership with the Ministry of Social Transformation “in building a more solid base in training in the arts in the community centres.”

Mr. Davis explained that while partnerships were being developed and training personnel had been contacted, there was still need for more community involvement.

“We want to partner with individuals in the communities as well to help to develop and seek out and look for these potential persons in the arts. Of course we would be in the forefront of researching and documenting these aspects but we cannot do it alone. We really need the help of others: groups and individuals in the community as we go forward in this process,” he explained.

The Nevis Performing Arts Centre [NEPAC], Mr. Davis said, “speaks to a new phase.” Because “the feeder programmes and feeder community centres in the other community areas” would direct their paths into NEPAC, Nevisians would be able to showcase their talents.

“I know we have a lot of good, talented Nevisians: musicians, singers and dancers and so on so it’s something that you could work and get your talent, work and get what you are very good at and perhaps one of these good days we will see you doing your live performances in the centre,” Mr. Davis said as he appealed to Nevisians to raise the level of their performances.