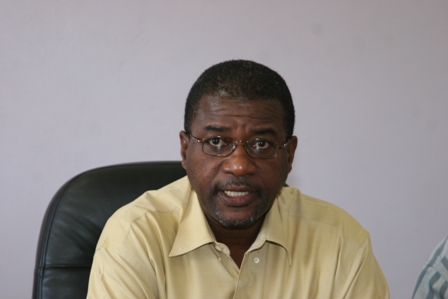 NIA-CHARLESTOWN NEVIS (February 08, 2011) — Chief Medical Officer (CMO) in the Federation of St. Kitts and Nevis Dr. Patrick Martin, has for the second time in two weeks come to the defence of the public water supply on Nevis.  He said allegations of contaminated water were baseless and the water supply was safe for consumption.

Dr. Martin cleared the air at a press conference convened by Minister responsible for Communications Works Public Utilities Posts Physical Planning Natural Resources and Environment in the Nevis Island Administration (NIA) Hon. Carlisle Powell, following the publication of an article in the local media last weekend which claimed that the public water supply was contaminated with coliform bacteria.  One week earlier reports had surfaced on the World Wide Web that the water was contaminated with salmonella.

“Specific to the matter at hand, the January 24-25 Salmonella allegation has been refuted. It is groundless [and] there is no evidence of Salmonella. If there was a Salmonella outbreak it would be attributed to the contamination of imported food mostly and people would be sick and there would be a surge at the emergency room, the health centres and private doctor’s practices. You would find the salmonella by the doctor ordering a test of stool and the doctor is then duty bound according to the law to report to the Ministry of Health not to the public.

“Since the dismissal of the salmonella allegation, I was informed on the weekend of an article in one of the news outlets referring to coliforms in the reservoir. Interestingly, it referenced a document from the water services Department dated December 21. Now by my calendar subject to correction, this is now February 7th, six weeks hence. I state categorically there are no reports of an increase in diarrheal related illnesses in Nevis,” he said.

As CMO who headed the team of Public Practitioners in St. Kitts and Nevis, he said he was duty bound to safeguard the health of the population, since health was a necessary component for productivity that was essential to personal and national growth and development. 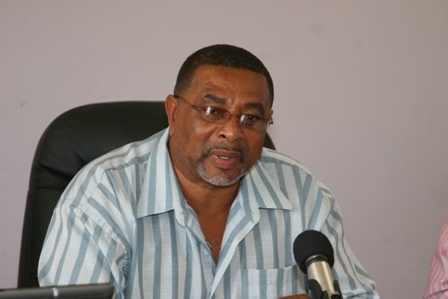 In the promotion, maintenance and safeguard of the health of the people, Dr. Martin said they regarded personnel in the Water department as key allies because there was no health without safe water and the humans could not survive without water after 48-72 hours.

Dr. Martin pointed to the strides made since the introduction of the Primary Health Care based health system in the Federation. He added that gastroenteritis was once a major cause of illness and death especially in infants in the Federation.

“In fact in the 1920s upwards of 400 children died before their first birthday with gastroenteritis, whooping cough, and other such scourges contributing to that massive loss of life. That was once upon a time.

“Since the advent of our primary health care based health system in the 1950s, steady progress has been made to the extent that now infectious diseases cause less than five percent of the deaths of this country. Ninety-five percent of the deaths in this country have to do with hypertension, heart disease, cancer, homicide, car accidents etc.,” he said.

The CMO stated that the data spoke to the dramatic improvement in the health of the country because of the delivery of portable water which was testimony to the professionalism of their colleagues in the Water Department, who worked more than 24 hours a day to ensure that the water was drinkable.

“Residents in Nevis are aware of the trials and tribulations of our brothers and sisters in Haiti for example because of the situation with cholera. Once upon a time there was such a situation in this country. We have gone beyond that because of sound public health practise and professionalism in the Water Department,” he said.

Meantime, Manager of the Nevis Water Department Mr. George Morris explained that they operated 16 wells and three main sources which were referred to as mountain springs (open catchments). He said 91 percent of the water in Nevis was generated from underground spring sources and nine percent from the mountain springs. The water is blended together and stored in reservoirs.

He noted that the Department was outfitted with lab capability which was used to check at two week intervals for various elements that emerged in the water. The report would be analyzed and chlorine treatment would be administered as necessary at the point where the water was stored.

Mr. Morris further explained that water from the wells were under constant pressure on their way to the reservoir, whereas water from the open water sources was free flowing coming from the mountain. However, based on weather conditions dry or wet, there would be an increase in turbidity in the water which could lend itself to elements in the atmosphere, something which has always posed a challenge for the Department.

“[With] the open sources, we would have our challenges in terms of birds or the visit of animals and other parasites that live in water. When the testing is being done at various points – I think we created 52 sampling points on the island and that would include the reservoirs and the district stand pipes – once we find anything that would cause any alarm, we would then engage in treatment. Based on what we find, the level of treatment would go up or come down,” he said.

Notwithstanding, the Water Department Manager assured all was being done possible to ensure that any level of contaminants found in the water was contained.

“We are not seeing that the level of contaminants is rising beyond our control and is cause for any big alarm.

“To date the medical people have not reported any illnesses that would derive from what we are finding in the water in Nevis. So I don’t think that there is any level of alarm for us to be too worried about. We are doing all within our power to contain it and the water is still safe but we would advise and we have been advising, to boil water whenever there are heavy rains or any storm passage,” he said.