NIA-CHARLESTOWN, NEVIS (February 9TH, 2011) — “We in the Nevis Island Administration [NIA] have long said that many of the projects done by the CCM government reflected cost overrun, time overrun and quality under-run and as a result, we are here to put this right.”

That view, expressed by Minister of Community and Social Affairs in the NIA the Honourable Hensley Daniel, came onsite at the Fountain Community Centre during a recent visit by NIA officials and St. James’ parish resident and Attorney General in the federal government the Honourable Patrice Nisbett.

Mr. Daniel’s ministry had embarked on a community centre construction mission that facilitated building a number of centres while equipping them with “community development programmes.”

While the centres at Combermere, Barnes Ghaut, Jessups and Cotton Ground will be new to residents of those areas, the Fountain Community Centre was being renovated and expanded.

“This [the Fountain Community Centre] was anything but a community centre. It lacked all the fundamental and critical rooms that were necessary to facilitate the programmes that we have,” Minister Daniel explained adding that his government had “the knowledge of how community centres are to be done.”

As part of the expansion, another storey had been added to the building. The upper level, according to the Community Affairs Minister will host a computer training room, restrooms and a hall while the lower level “will be left for the library and the other rooms for basic training.” 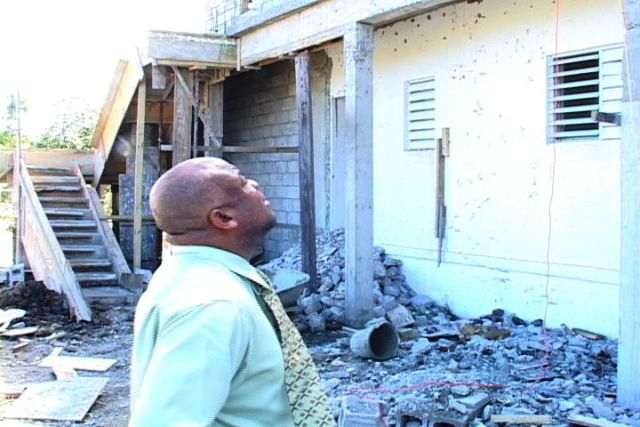 “I think it is important for us to point out to the community here in Fountain that they had been robbed of the opportunity to use a community centre for many many years because it having been done badly meant that it could not be used for the programmes to enhance community life,” Minister Daniel said.

He also recorded his gratitude, on behalf of the NIA, to the contractor Mr. Lesroy Hanley and his team for “working speedily” on the centre.

As a former member of the NIA’s Cabinet, Minister Nisbett said he was pleased that the Joseph Parry-led administration ensured that his parish was developed through the construction of roads and community centres and the initiation of “people empowerment programmes.”

“I would want to thank the Honourable Minister and the Nevis Island Administration for ensuring that the projects that I spoke about when I was a member of the Cabinet of the NIA are becoming realities today so that the people of St. James’ who have been without community facilities for a very long time can now say like the other constituencies of Nevis that we have community facilities where we can run community programmes and the Nevis Island Administration really cares about ensuring that people are in fact looked after,” Minister Nisbett said.

He used the opportunity to encourage villagers to capitalise on the centre because “community centres are built for people.”

“It’s people who would come to the centres [and] take part in the programmes and it’s people who will become empowered as a result of the existence of a dedicated facility to run the necessary programmes.

Also present were the Director of Public Works Mr. Raoul Pemberton and the NIA’s Minister, Junior Minister and Permanent Secretary in the Ministry of Works and Public Utilities the Honourable E. Robelto Hector, the Honourable Carlisle Powell and Mr. Ernie Stapleton respectively.