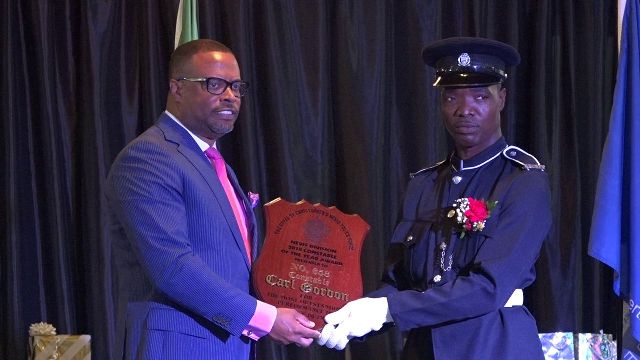 NIA CHARLESTOWN NEVIS (February 25, 2019) — An officer at the Criminal Investigation Department No. 653 Constable Carl Gordon, is the Constable of the Year for 2018 on Nevis. He emerged winner from a field of eight awardees at the Royal St. Christopher and Nevis Police Force (RSCNPF) (Nevis Division) Constable’s Awards Ceremony and Dinner. It was hosted by the Strategic Planning Group on February 23, 2019, at the Occasions Entertainment Arcade at Pinney’s Estate.

The Top Constable who also received the Premier’s Award, was presented at the ceremony with a plaque, a Certificate of Excellence and a television set by Hon. Mark Brantley Premier of Nevis. In response Mr. Gordon noted that the top prize was not only about him.

“I received this award not only on my own behalf but that of the Criminal Investigations Department team, the Violent Crime Unit team, the Crime Scene Unit team and the Special Victims Unit team.

“I also receive this award on behalf of the community who have assisted me greatly in my investigations,” he said.

He referred to the ceremony as an auspicious occasion, one which he will remember as being among the fondest in his life on Nevis.

The officer used the opportunity to urge his fellow constables to give of their best because the community and the country deserve it.

He registered gratitude to everyone for their support, and for the recognition he received.

The first runner up was No. 677 Constable Trevin Mills of the Violent Crimes Unit. He was presented with a Certificate of Excellence and a television set. Mr. Mills also won the Commissioner’s Award.

The third runner up was No. 735 Constable Lowell Wallace of the Task Force Unit. He was presented with a Certificate of Excellence and a television set. Mr. Wallace also won the Divisional Commander’s Award.

During the ceremony, all the awardees were presented with Certificates of Performance by  Her Honour Hyleeta Liburd, Deputy Governor General on Nevis.

The Royal St. Christopher and Nevis Police Force Strategic Planning Group was formed in 2002. Its mandate was to review operation methods and to devise strategies to fight crime on Nevis.