CHARLESTOWN NEVIS (February 15, 2010) — Police Constable Leon Lake was named Police Officer of the Year ending 2010 on Nevis, a coveted title he won from among nine awardees in the Nevis Police Division. The elated officer was presented with the award at the 7th annual Police Constable Appreciation Awards on Saturday.

During the event which was hosted by the Strategic Group, Nevis Police Division, a humbled Police Constable Lake said he was honoured to be named leading Constable.

“Receiving this award is an honour, however I feel all the officers of the Nevis Division should be recognised for their contribution, be it little or great to the Police Force.

“I want to express my gratitude to all those who appreciated my hard work and dedication to the Royal St. Christopher and Nevis Police Force and acknowledging my accomplishments for the past year,” he said.

The Officer noted that he was of the fervent view that the qualities that won him the top award were gained from his fellow officers in the Criminal Investigation Department namely Inspector Mitchell, Sergeant Alanzo Carty, Corporal Gordon, Constable Hodge and a past recipient of the award, Constable James Sam Jeffers. 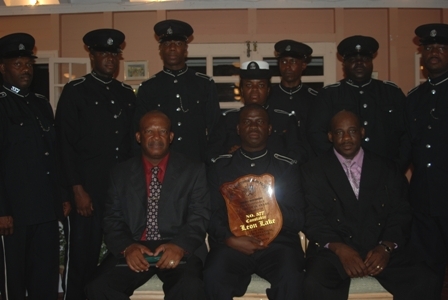 “These qualities include professionalism, the demonstration of potential and capacity to grow under corresponding circumstances.

“Since joining the Royal St. Christopher and Nevis Police Force in October 1999, I have aspired to do whatever is necessary to better myself and make a positive impact on the police force and I am pleased to be attached to the Nevis Police Division where I think most of those skills were gained,” he explained.

Officer Lake also expressed gratitude to the Nevis public who he said embraced all the officers including himself who had been transferred from St. Kitts and thanked them for their kind contributions toward the building and development of police on the island.

He remained hopeful that 2010 that fellow officers would build a better working environment in which members of the public and officers could enjoy better relations through community policing in their quest to reduce crime on the island and by extension the Federation.

Officer Lake also urged his fellow officers to endeavour to create a climate in which they could be motivated to excel.

“I ask that we the Police Officers try and create a climate in which we would be motivated to excel so that when engaged in work, we contribute our best. We should be intentional learners and concentrate on self improvement and encourage it in others.

“I know at times financially we are discouraged, pay day sometimes seems years apart but I ask that we stay focussed, keep on the right path and not to be seen as impartial, non confidential nor corrupt. Let us strive to do what is right and live to the oath that we are bound by,” he said.

Outside of the senior officers who had assisted him in his development, Officer Lake thanked his Mother who resides in St. Kitts Mrs. Edith Lake, his Aunt on Nevis Mrs. Ambrosine Thompson for their unwavering support and guidance and fellow officers, friends and well wishers who assisted him.