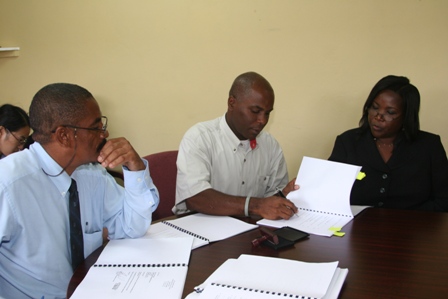 Basic Needs Trust Fund Project Coordinator for St. Kitts and Nevis Mr. Osbert DeSouza looks on while Permanent Secretary in the Ministry of Social Development signs the contract with Mrs. Lornette Queeley Connor for the construction of the Barnes Ghaut Adult Education Centre

CHARLESTOWN NEVIS (June 21, 2010) — The contract for a second project under the Basic Needs Trust Fund (BNTF) this month, was signed between the Nevis Island Administration and Contractor Beyond Homes, at the Fund’s local office on Government Road on Friday.

The new project which is scheduled to commence on June 21st and conclude by October 01, 2010, will see the construction of the Barnes Ghaut Adult Education Centre. Permanent Secretary in the Ministry of Social Development Mr. Alsted Pemberton, who signed the contract on behalf of the NIA, said the project would be of benefit to the adults and young people of Barnes Ghaut and environs.

“This facility would be very beneficial to the adults and young people of the area as we seek to continue the development of our young persons, as well as our older persons within the community.

“We in the Ministry of Social Development see training as a very important tool to the development of the economic and social development of Nevis and we continue to strive in that regard,” he said.

According to Project Coordinator BNTF Nevis Office Mrs. Myrthlyn Parry, the facility would be a one storey lumber and galvanise sheet building. The structure would house two class rooms, a computer lab, a library, office space, a store room, two bathrooms, kitchen and a room for use by the elderly. The senior citizens would be able to utilise their specialised area for social interaction, to receive health care and to engage in mentally stimulating activities. 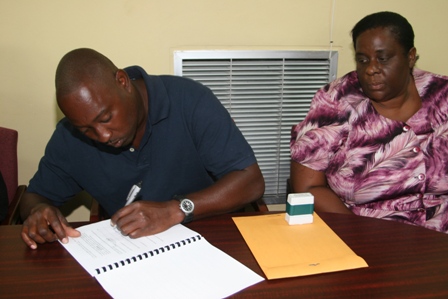 She explained that the project, in its current state, had been modified from a structure that would house two classrooms, a kitchen, library and a small meeting room as submitted under the previous NIA. It was also slated to be constructed above the existing basketball court. Consultants for the project are Best and Associates of Basseterre in St. Kitts.

Mrs. Parry said the structure would be constructed on the site of the existing basketball/netball court which would be relocated to the lower section of the community.

Meantime, BNTF Project Manager in St. Kitts and Nevis Mr. Osbert DeSouza said the Caribbean Development Bank, the Canadian Development Agency and the Federal Government were pleased to execute another project in partnership with the NIA.

He indicated that work toward the project had commenced some time ago but was certain that the final product would ultimately uplift the people of Barnes Ghaut socially and educationally.

However, he used the moment to issue an appeal to persons who would utilise the facility on completion, to keep it in good order.

“I want to make a special appeal to the users of the facility to try to see if you can ensure that the facilities are kept in a very good state of repair. Please be minded that maintenance is a very challenging thing with all of the BNTF projects. 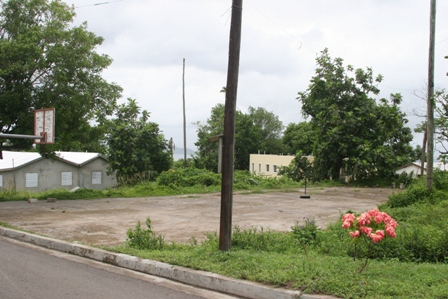 “When we have visits by the Caribbean Development Bank officials we would like to visit this facility and see that it is being properly kept by the users,” he said.

Mr. DeSouza also thanked all who he said played a successful role in the project which included contractor Mr. Curtis Liburd, whose work on a prior BNTF project he said was impressive.

In response, Mr. Liburd registered thanks to those who made it possible for his successful bid on the project. He said he was hopeful that work would run smoothly and looked forward to the challenge of constructing the facility within the contracted period from June 21 to October 1st, 2010. 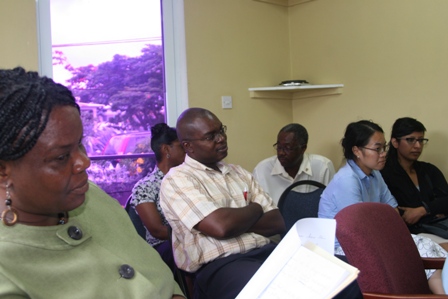