Minister of Agriculture the Honourable E. Robelto Hector presenting medal to Mrs. Alison Cornelius for her work in crop farming and agro-processing.

NIA-CHARLESTOWN, NEVIS (December 7TH, 2010) — The Nevis Island Administration’s [NIA] Ministry and Department of Agriculture continue to demonstrate their commitment to the island’s level of food production and food security.

This commitment was further underpinned last Thursday [Dec. 2] when both offices collaborated to honour Mrs. Alison Cornelius, Mr. Vincent Jones and Mr. Elroy Warner for their work in the areas of crop farming and agro-processing; fishing and livestock farming respectively.

The three, although originally scheduled to be awarded on the Oct. 16 observance of World Food Day, with bright smiles on their faces, appeared appreciative that their years of contribution to the island’s agriculture industry were publicly recognised.

Minister of Agriculture in the NIA, the Honourable E. Robelto Hector said the ceremony was not just to honour persons for their work, but to “honour those persons who had done well in Agriculture.” 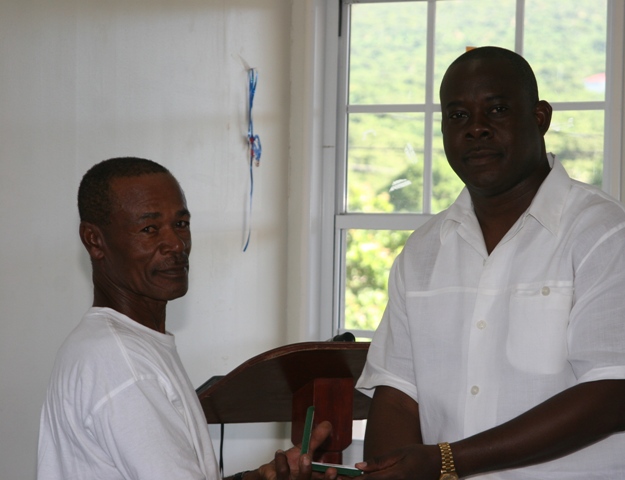 Minister of Agriculture the Honourable E. Robelto Hector presenting medal to Mr. Vincent Jones for his work in fishing.

The Agriculture Minister presented gold medals, engraved with the Food and Agriculture Organisation’s [FAO] logo to the awardees and assured them that his ministry was in full support of their work.

As he commended the employees of the Ministry and Department of Agriculture for their innovative activities toward ensuring the agriculture sector remains vibrant, Minister Hector reminded them of the significant role of agriculture to the economy.

Permanent Secretary in the Ministry of Agriculture Dr. Kelvin Daly, in his remarks, described the awardees as “the best among the best.”

“We owe to our farmers, fishers, agro-processors and others the highest recognition and gratitude for their labour that all of us, more often than not, take for granted,” he said as he encouraged the awardees to proudly display their medals in their homes and not put them away “in some drawer or under the kitchen sink.” 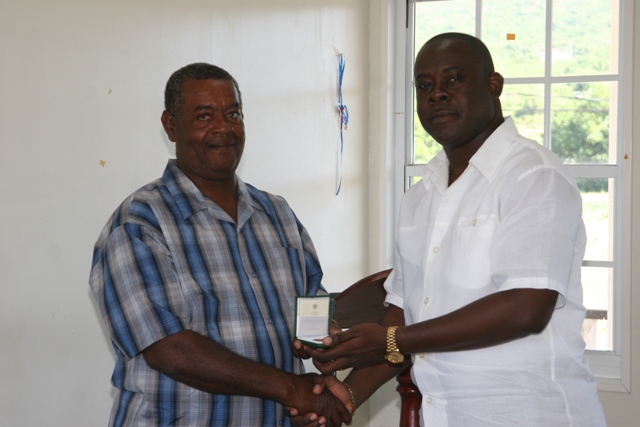 Minister of Agriculture the Honourable E. Robelto Hector presenting medal to Mr. Elroy Warner for his work in livestock farming.

As the whole world continues to “unite against hunger” in 2010, agriculture workers on Nevis, according to the officials present, contribute to the government’s initiatives in that regard.

“We in the Ministry of Agriculture, more than most, will know firsthand the inherent difficulties and sacrifices associated with safeguarding our country’s food security. These three persons are those on the frontline of this battle and they must be praised and honoured for it,” Dr. Daly explained.

Also speaking at the ceremony were Director of Agriculture Mr. Keithley Amory and Communications Officer at the Department of Agriculture, Mr. Eric Evelyn.

The ceremony was held in the conference room of the Department of Agriculture which is located at Prospect.