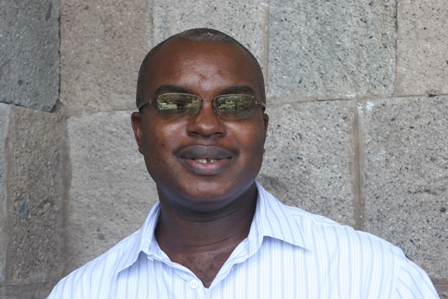 Permanent Secretary in the Ministry of Communication and Works Mr. Ernie Stapleton.

CHARLESTOWN NEVIS (October 28, 2010) – Ongoing restorative works on parts of the Island Main Road commenced in earnest in the aftermath of torrential rains at the start of October which wrecked parts of Nevis’ road network. Permanent Secretary in the Ministry of Communications and Works Mr. Ernie Stapleton said works were continuing well and would cost the Nevis Island Administration (NIA)an estimated EC$2.2million.

Mr. Stapleton made the disclosure in an interview with the Department of Information on Wednesday. He used the opportunity to appeal to the public for tolerance and cooperation during the ongoing repairs.

“In addition to that, I want to use this opportunity to appeal to the general public for their cooperation as we execute these works. The traffic would be diverted in some cases and it would be inconvenient for some people to travel while road work is being undertaken. So we are asking for the cooperation of the general public to bear with us as we execute these works on the Island Main Road,” he said.

According to Mr. Stapleton, the island’s road network had suffered significant water damage but repair work to alleviate the traffic was being undertaken by the Public Works Department in some areas while the private company on Nevis, Surrey Paving Aggregate Caribbean Ltd. would deal with the more intricate repair work.

He said Public Works Department continues work in the Prospect (Noel’s Garage) area and they have done some work in the Pancho area where the road asphalt was significantly damaged. They have also conducted work on the roads in and around Charlestown and continue to fill and asphalt areas toward Gingerland. 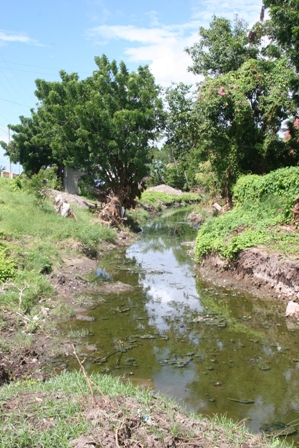 “Of course the Public Works Department would be working with Surry Paving in terms of supervision, project management and execution of the work,” Mr. Stapleton explained.

With regard to the ghauts (natural waterways) that were also affected during the passage of disturbed weather, Mr. Stapleton noted that a decision had been taken during internal discussions that all agencies of the Nevis Island Administration (NIA) would work together to clear them.

He pointed to the Bath Ghut, along which a number of homes were threatened in Stoney Grove, had posed a challenge for the NIA during the heavy rains.

“We had a significant amount of water flowing over the culverts and we have been looking at how we can ensure that there is free flow of water in the Bath Ghaut area. I know that our guys have been at the Bath Ghaut, especially down on the beach area, looking to see what caused some of the challenges that we faced during the rainfall and what can be done to rectify it.

“I think it is an ongoing process that we are dealing with right now. The Stoney Grove area is a more long term solution because we are talking about protecting some homes that are on the edge of the ghaut in the Stoney Grove area. We want to develop a more long term plan. Of course we have been doing some remedial work there to alleviate the situation but we have to come up with a long term solution for that area, which is something that we will be working on shortly,” he explained.

Mr. Stapleton also spoke of the Nisbett Ghaut which the Public Works Department made repairs. However, he said the area was a long term matter that would involve engineering advice to avoid similar situations there. 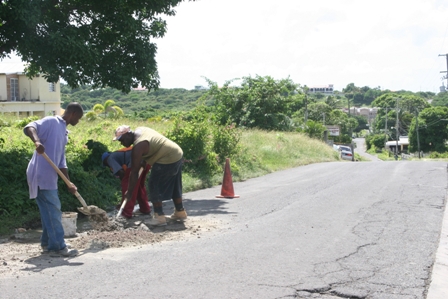 Notwithstanding, Mr. Stapleton contend that much of the overflow which jumped the areas provided had to do with debris blocked culverts and as a result, created major damage to sections of the Island Main Road.

He said a combination of factors would have to be considered with regard to clearing ghauts, so that the water flowed in the allotted areas and there were no blockages that could cause any damage before the water reached the ocean or generate more water than the culverts could handle.

However, the reality as it existed, the Permanent Secretary said, was increased activities on the island in recent times among them construction, which resulted in increased water on the Island Main Road and in various communities and that situation continued to create a challenge for the NIA.

He said even as solutions to deal with the existing challenges were debated, drainage was one priority area which would be critical to the construction of roads in the future now that Nevis was faced with torrential or unusually heavy rains. 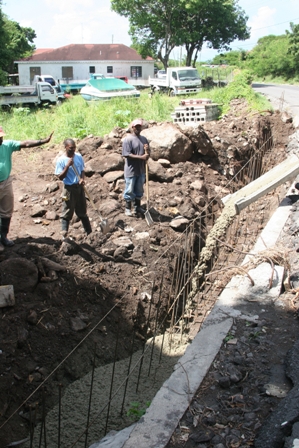 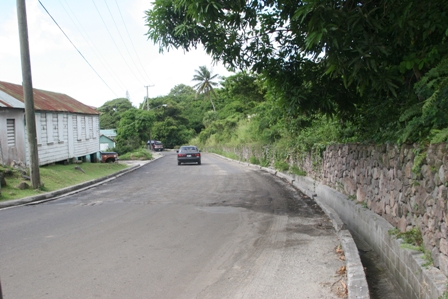 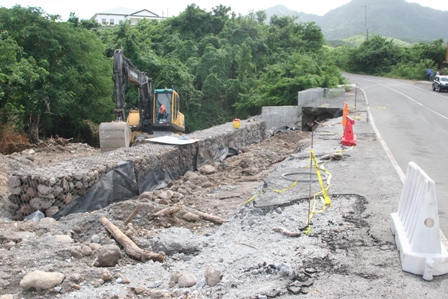 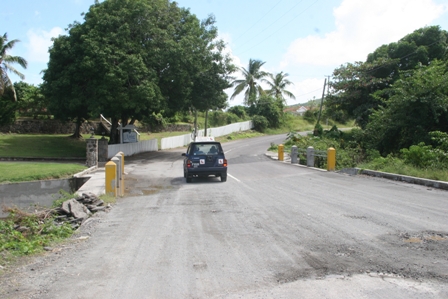 Road repair works completed at along the Nisbett Ghaut