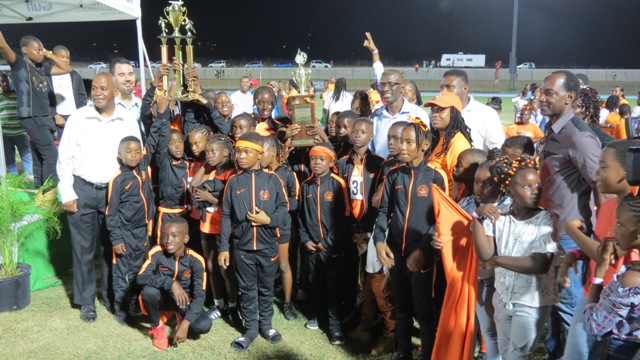 Athletes and staff of the Charlestown Primary School, champions of Zone A in the 27th annual Gulf Insurance Inter-Primary Schools Championship with their trophy presented by Mr. Henry Francis Human Resource Manager of the Gulf Insurance Ltd. in Trinidad, at the Nevis Athletic Stadium at Low Ground on April 03, 2019. Also present are Hon. Eric Evelyn, Minister of Youth and Sports on Nevis and Hon. Troy Liburd, Junior Minister of Education and Mr. Kevin Barrett, Permanent Secretary in the Ministry of Education and Principal Ms. Latoya Jeffers

NIA CHARLESTOWN NEVIS (April 04, 2019) — The Charlestown Primary School (CPS) won the championship title in Zone A for the second consecutive year in the 27th annual Gulf Insurance Inter-Primary Schools Championship, while the Elizabeth Pemberton Primary School (EPPS) won in Zone B for the 8th consecutive year. The keenly contested games hosted by the Nevis Island Administration (NIA) were held for the second year at the Nevis Athletic Stadium at Low Ground on April 03, 2019.

Students from the Charlestown, Ivor Walters, St. James, Elizabeth Pemberton, St. Thomas’, Violet O. Jeffers Nicholls and Joycelyn Liburd Primary Schools, the Maude Cross Preparatory School and the Nevis Academy, who participated for the first time, took part in 54 events under the patronage of Ms. Latesha Clarke and Mr. Alan Ward, past students of the Violet O. Jeffers Nichols Primary School. The theme was “Every child is a winner.”

During the opening ceremony, Hon. Eric Evelyn, Minister of Youth and Sports on Nevis thanked Gulf Insurance and local agent Mr. Arthur Evelyn for their continued partnership with the NIA.

The minister told the athletes they were all winners. He urged them to perform with a winning spirit and one of friendliness, and reminded them that they were competing in a facility that is second to none in the region.

Mr. Evelyn also commended the NIA for its foresight to construct such a facility which has the ability to produce athletes at an international level.

“It’s a facility that can take you much further in the field of athletics and we are expecting hat this facility will breed CARIFTA and of course athletes that could go to the Olympics,” he said.

He noted that supporting the annual event for 27 years is an indication of a strong and significant relationship which Gulf and the Assuria family are proud to have developed and assured of the continued partnership.

“We definitely intend to maintain our solid relationship with these future Olympic athletes here today, these beautiful young athletes taking part in this Nevis Mini Olympics,” he said.

Mr. Clark used the opportunity to underscore the company’s long standing and strong relationship with Mr. Arthur Evelyn and thanked him for the significant role he continues to play in leading Gulf’s commitment to the people of Nevis.