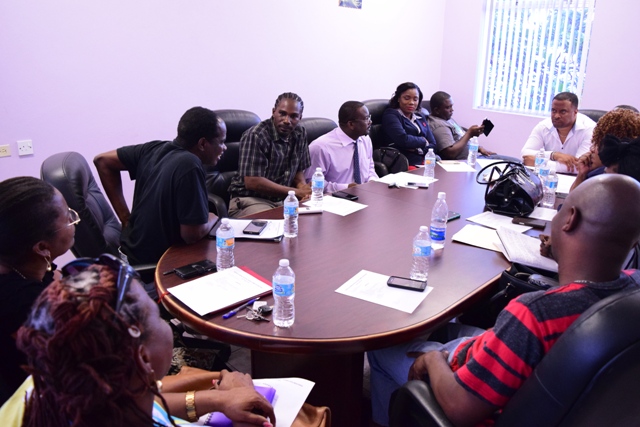 Hon. Mark Brantley, Deputy Premier and Minister of Culture in the Nevis Island Administration meeting with committee members of the 2017 Culturama festival, at the Administration’s conference room in Charlestown on February 21, 2017
NIA CHARLESTOWN NEVIS (February 22, 2017) — The 2017 Nevis Culturama Committee met for the first time on February 21, 2017, at the Nevis Island Administration (NIA) conference room in Charlestown,  to plan and begin coordinating activities for the 43rd edition of Nevis’ annual summer festival, Culturama.
The meeting, chaired by Executive Director of the Festival Secretariat Antonio Abonaty Liburd, was designed as an orientation meeting for the staging of the festival.
Hon. Mark Brantley, Deputy Premier and Minister responsible for Culture in the NIA, welcomed the new and returning committee members and thanked them for volunteering to serve in their respective roles for 2017 festival.  He noted that in many respects, serving on any one of the committees is a thankless job.
He also underscored the NIA’s support for the festival, the island’s premier cultural event.
The new committee, although not yet fully constituted, looked at some innovations that could enhance the experience for patrons during the Culturama 2017 festival.  Better incentives and prize awards for participants, as well as the addition of all-inclusive fetes to this year’s calendar of activities were among the matters discussed.
Billed as the Caribbean’s Greatest Summer Lime, Culturama was first celebrated in 1974, to assert the Nevisian cultural identity, while embracing the significance of emancipation from slavery.
Activities for Culturama 2017 are slated to begin on June 16 with the festival’s introduction of all contestants in the various shows. However, the official date for this year’s celebration is July 27 to August 08, 2017.