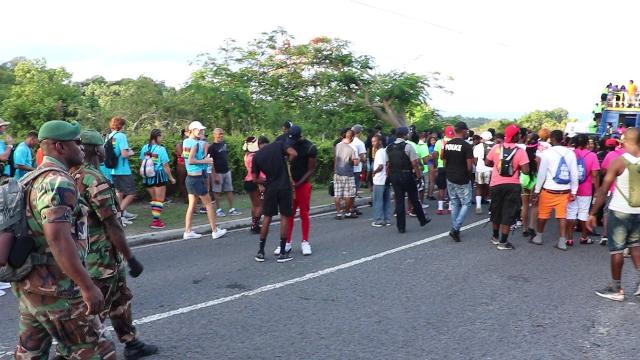 Members various security forces in St. Kitts and Nevis at work during Culturama 45

Mr. Liburd made the disclosure on August 07, 2019, and thanked the security personnel for the feat.

“To the security forces, I would like to say a special thank you, and this year we can similarly boast of another incident-free Culturama festival.

“I think that this is the seventh year running that we have had an incident-free Culturama festival, and so I would like to thank the security forces, the Police, the private security, the Army, the Fire and Rescue Services and I would also like to include the EMS for providing such great support to Culturama 45,” he said.

Mr. Liburd also used the opportunity on behalf of the Nevis Culturama Committee, the Ministry of Culture, the Minister of Culture and the entire Nevis Island Administration, to thank all who partnered with the committee, to stage a successful Culturama 45.

“To all the organisers of fringe activities—Freaky Friday, Glow Fete, 4-in-1 Fete, Toucan Sounds presents Kes The Band—I say a big thank you for coming on board and partnering with the Nevis Culturama Committee.

The Culturama 45 Chairman also expressed gratitude to the sponsors of this year’s festival, and noted that without their financial contributions the committee would not have been able to stage a festival of such magnitude.

Participants in the various competitions throughout the festival were also commended for taking part.

Meantime, Mr. Liburd had high praise for the Environmental Health Department for their invaluable assistance.

“It would be remiss of me if I did not also thank the Public Health Services, the Department of Public Health for their contribution. I recall last night when I left the office after 10 minutes to 11, the health workers were already on the streets of Charlestown cleaning the streets getting them ready for normal work this morning, and so I would like to say a big thank you to Merville Morton to Javier Ottley and the rest of the team.

“In fact last night at about 11 o’clock Mr. Morton was on the streets at Happy Hill Drive with his gloves, with his shovel and he himself joined in the operations of getting Charlestown clean, and so I would like to say a big thank you to the Environmental Health Services,” he said.

In conclusion, the Culturama 45 Chairman urged members of the public to stay tuned for the Slogan Contest for Culturama 46 which he stated would be launched shortly.