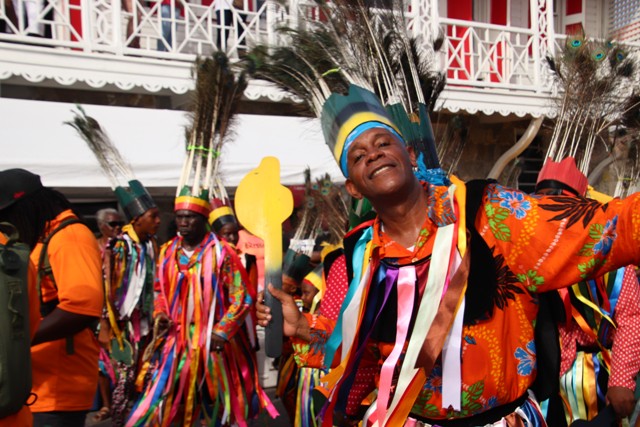 Hon. Eric Evelyn, Minister of Culture on Nevis, masquerading and taking part in the Culturama 45 Cultural Street Parade in Charlestown on August 06, 2019

The minister made the comment when he spoke to Mr. Antonio “Abonaty” Liburd, Chairman of Culturama 45, during NTV’s live coverage of the Cultural Street Parade in Charlestown on August 06, 2019.

“Culturama has been fantastic. Of course we have had our challenges. We have had our little difficulties needling here and there but overall I have been very, very pleased with the way things have turned out. I think we billed it as the best ever and I think it is turning out that way,” he said.

Mr. Evelyn who was a participant in the parade, was at the time playing mas with a masquerade group from Nevis. He noted that the number of traditional dancers participating was important.

“Actually we have three masquerade groups. The one in front is David Dynasty. I am playing with the Cotton Ground Masquerade that’s the one headed by Duggins, and there is one behind from St. Kitts as well.

“We intended that we must have at least 45 masqueraders on the road this afternoon. We have more than that and so we are very delighted,” he said.

Culturama, known as “De Caribbean’s greatest summer lime,” is the foremost cultural event on Nevis in which Nevisians celebrate their cultural heritage.

In recent years the activities which span the event have grown to include a number of fetes which reflect the island’s evolving culture, particularly where younger persons are concerned.

The festival started in 1974 by the Nevis Dramatic and Cultural Society (NEDACS) came at a time when the organisation felt that Nevis was losing its cultural heritage and in an effort to preserve the island’s cultural traditions the idea of Culturama was conceived.

Culturama has become a permanent feature on the calendars of regional festivals. It has been extended to 12 days but despite the changes over the years, the festival remains rooted in its initial objectives for which it was formed, to revive and promote the cultural traditions of Nevis.