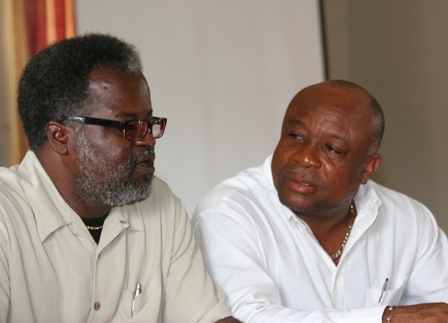 Minister responsible for Culture on Nevis Hon. Hensley Daniel (r) with of Chairman of Culturama 2010 Mr. Halsted “Sooty” Byron at the Press Conference

CHARLESTOWN NEVIS (July 06, 2010) — The celebration of Nevis’ heritage is an annual 14 day event which Minister of Culture in the Nevis Island Administration (NIA) Hon. Hensley Daniel said, provided a unique opportunity to showcase the island’s music, song and dance.

The Minister, who was at the time delivering remarks at a Press Conference on Friday to launch the official calendar of Culturama 2010, told local media that the display of culture from July 22nd to August 3rd should be considered the zenith of those performances during the year.

He said the task of the Ministry of Culture was to ensure that the island’s heritage was developed and presented with a quality that appealed to Nevisians and visitors alike.

“We take our responsibility seriously with regard to the development of the performing arts. While I say that, we are at the moment constructing a Performing Arts Centre in Nevis and that is to be finished by December of this year so that next Culturama, some of the performances will be held at the Performing Arts Centre. All of that ties in with ensuring that we pay close attention to culture because the value of culture is great,” he said.

Meantime, the Culture Minister said the time had come for Nevisians to pay closer attention to the economical value of Culturama and its impact on the economy. 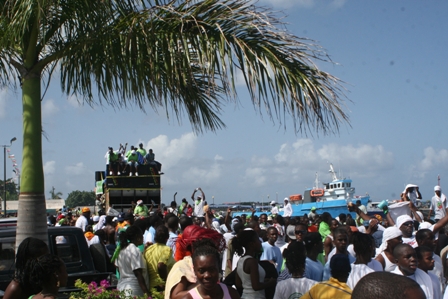 “I have not yet been able to see the impact of Culturama on the economy but certainly it has had a tremendous impact on the economy in Nevis and if what I see before me is some 14 days of action, we are going to see increased levels of sale.

“That is where I think our commitment to Culturama ought to point. All of the stores in Nevis are going to report increase sales as people prepare for these 14 events because I think if I were to go to all 14 and I see the same people, they will have 14 different outfits and those outfits will be procured here in Nevis or elsewhere. If they buy them in Nevis they pay the price, if they import them we get the Customs Duty and all the other import duties. So when we come to Culturama it is a time for us to bear in mind that this is also an economic activity,” he said.

Mr. Daniel also pointed to the social impact Culturama had on the people of Nevis and spoke to the importance of leisure time for the island, a matter which should not be treated lightly.

“On the other side there is entertainment and enjoyment. We cannot have a country that runs 365days of the year without pausing and enjoying some fun…We are going to get a chance to socialise, to interact with each other, to cool down the tensions brought about by the stresses and strains of life on a daily basis and we are going to get a chance to be able to talk to each other, buy a drink for each other and socialise with each other. So that cannot be treated lightly,” he said.

In countries where there is no such thing, you have increased incidence of crime and violence. I think we all know there are people who travel from New York to several places around the world, simply for entertainment and enjoyment or for a break. In that context I am going to welcome Nevisians and Kittitians and everyone else who will join us for Culturama. That too adds value because when you come you spend additional money,” he said. 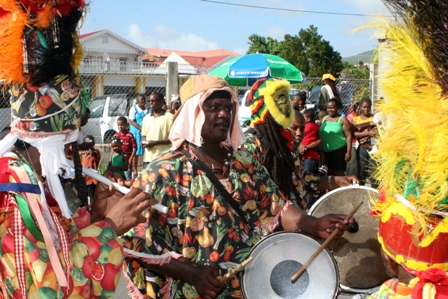 Culturama 2010 will be celebrated under the theme “Culturama 2K10! A Unique Cultural Blend!” Though a number of fringe activities will come ahead of the official calendar of events, the first major event will take place on July 22 when the official Launch of Culturama will take place coupled with the Junior Kaiso Contest.

On July 23rd, the Culturama “King of De Jungle” Band Clash which will feature TAXIK Band with Claudette Peters and a Local DJ Competition will take place.

On Saturday July 24th will be the TDC Senior Kaiso Semi-Finals Contest and the HOPE Nevis Kids Carnival.

Slated for Sunday July 25th will be the first ever Miss Culture Swimwear Contest which will be followed by the celebrated Ms. Caribbean Culture Queen Pageant two days later on July 27th.

On July 28th will be a production from the RHYTHMZ Dance Theatre and on July 29th will be the Mr. and Ms. Talented Youth Pageant. On July 30 will be a Fruit Festival by the Department o Agriculture and the International Night of the Stars hosted by Oualie Masonry Products Ltd.

July 31st will be reserved for the all day Culturama Cultural Food Fair followed by the TDC Senior Kaiso Finals and the Ultra Sonic Band’s Super Sexy Dance.

The following day August 1st, will be the Culturama Drag Races followed by the coveted Ms. Culture Queen Pageant. On August 2nd will be the Emancipation J’ouvert Jump Up, the Culturama Horse Races and the J’ouvert Cool Down at Pinney’s Beach.