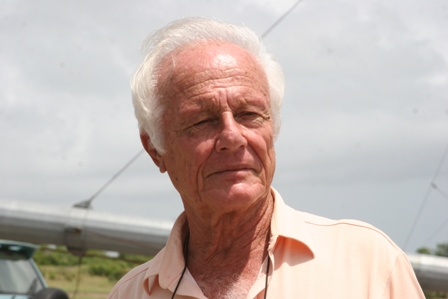 During a visit at the site on Wednesday, the Department of Information met with Mr. Cramer who said his visit was as a result of an invitation to visit the project.

“I am born in Nevis and I came up here on the invitation of Sugars to see what they are doing up here. I am very impressed and I am glad to see it seems to be working. I hope it will be connected to the main grid shortly and then we will get the results. Between this [wind energy] and the geothermal I think Nevis should be well on the way to being completely independent and perhaps selling St. Kitts some electricity,” he said.

The Nevis born Businessman said he had also visited wind farms in other parts of the world which he said were different to that on Nevis.

“The wind farm is somewhat different. When I was in Israel myself and Ken Kelly and a group we took to Israel, the windmills were very much bigger and very noisy. This [on Nevis] impressed me as being very silent and I hope that’s a good sign for the future. By the time we have about 100 of these going it should be pretty good and I wish you all well.

With regard to other ongoing developments on Nevis, Mr. Cramer said he was pleasantly surprised with the number of construction sites he had seen enroute to the wind farm. 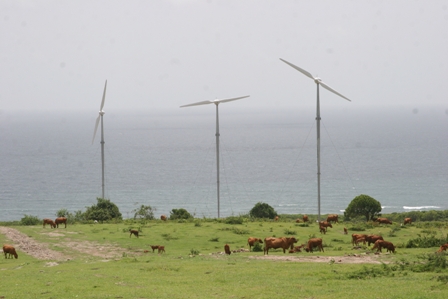 “I am surprised to see so many building going on, especially in private homes. On our trip around to this area there are quite a few new homes which I had never seen before seem to be springing out of the ground and I think things are going pretty well,” he said.

The project is nearing completion has seen the erection of all eight wind turbines.  One of the technicians for turbine manufacturers Vergnet Mr. Vincent Morel told the Department of Information, that the project had reached its testing stage.

He explained that his job was to take over where the erection team had left off and it was his responsibility to ensure that the turbines were running to specifications and in sync with the Nevis Electricity Company’s (NEVLEC) power grid.

Testing he said was set for a 100 hour programme during which the turbines had been hooked unto the NEVLEC grid before they were fully commissioned. 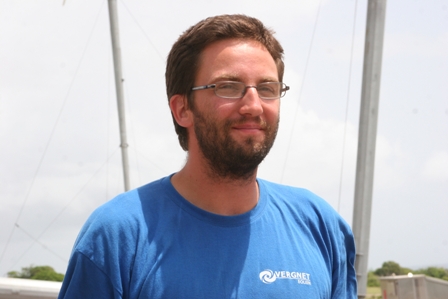