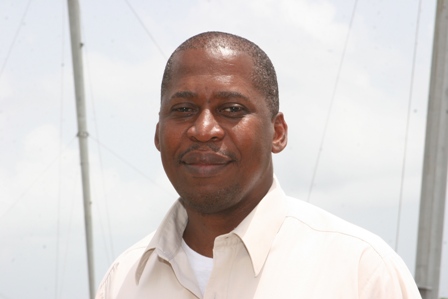 General Manager of the Nevis Electricity Services Ltd. Mr. Cartwright Farrell on site of the Wind Farm at Maddens in the parish of St. James

Mr. Farrell made the disclosure in an interview with the Department of Information during a site visit to the farm. He explained that the turbines, when in operation would provide a maximum of 1.6killowatts of power which represented 20 percent of the peak 9killowatts used on Nevis

“Twenty percent of the power being provided at best into our grid by wind energy, dependent on the amount of wind that’s blowing, we will see some savings but it is always dependent on how much wind.

“They are actually on the grid but most of it is commissioning and testing. They are going to go on the grid officially very soon and I think immediately you will see some savings. It might not be significant, it might be one or two cents off the fuel surcharge but at least a saving and as we learn a little more about the wind energy, we expect it to be more significant at some point down the road,” he said.

The Nevis Electricity Company Ltd. is the sole provider of electricity to consumers on Nevis. According to Mr. Farrell, every unit of electricity delivered from the sights of the Independent Power Producers (IPP) on the island including Wind Watt and West Indies Power had to go through the NEVLEC system to get to consumers. 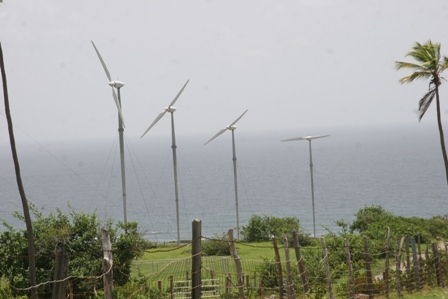 However, the Utility’s General Manager also pointed to the recent power outages that consumers on the Gingerland and Cotton Ground feeders continued to experience and noted that they were directly as a result of the ongoing testing work at the wind farm.

“We have had before Jonathan Kelly who is one of the Engineers at the Power Station and he has been working very closely with them in terms of the commissioning side. Before him was Anelda Date and we had the Senior Electrician at the Power Station Mr. Jevon Eaten and they have been around and been able to see what is going on over here in terms of how they generate the electricity, how they interconnect with NEVLEC’s system.

“Vergnet, the company that manufactured the turbines are going to run a course on maintenance and operation of the wind farm and we hope to have at least two, Jonathan and Jevon on that course. So there will be some cross training from wind farm to NEVLEC and vice versa,” he said.

The General Manager also said that there were other Nevisians who had received training from the company and they would take charge of the farm’s maintenance operations when the overseas technicians were away.