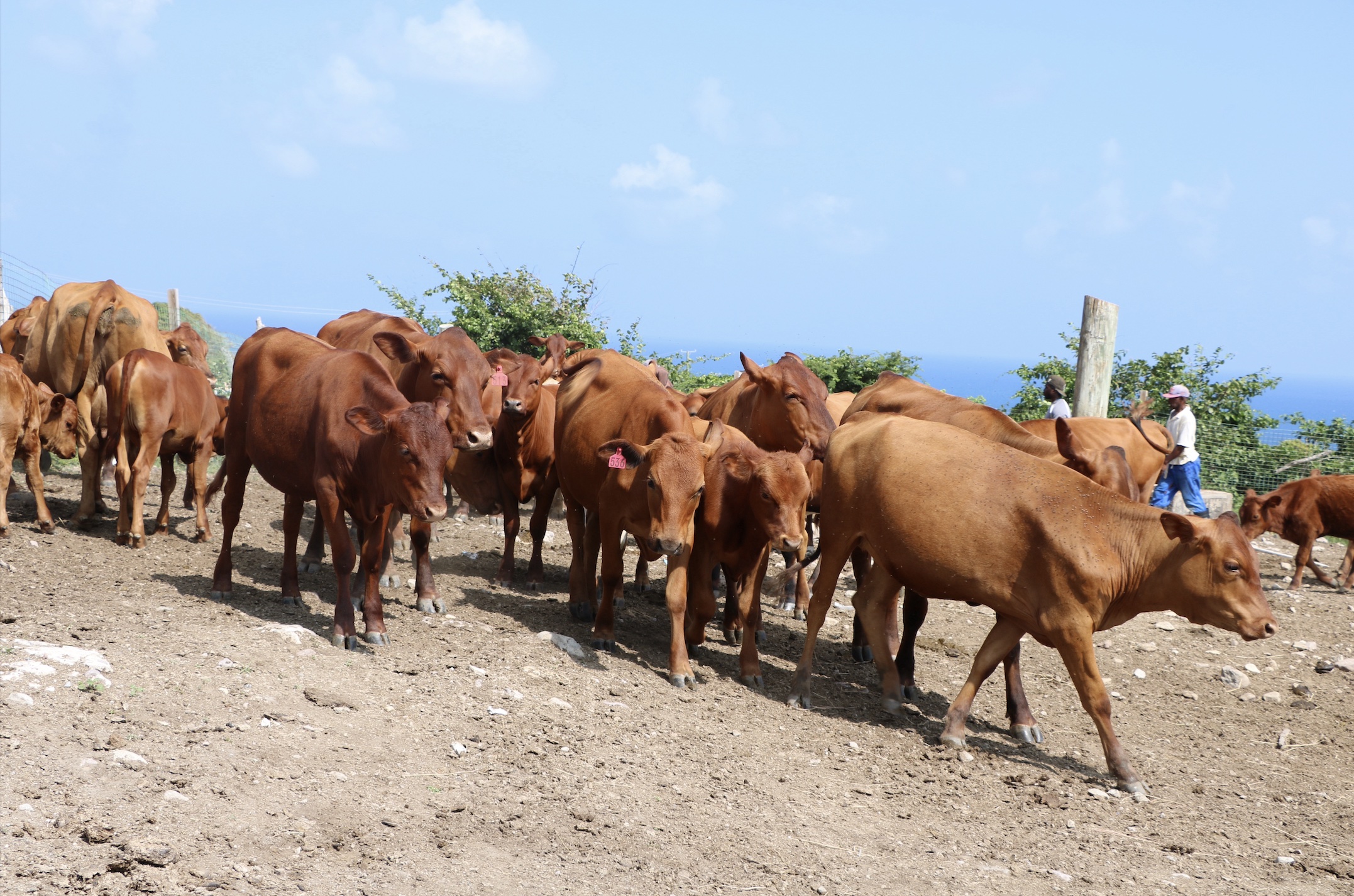 A section of cattle in pristine condition at the government owned Maddens Stock Farm on October 29, 2021

NIA CHARLESTOWN NEVIS (November 01, 2021) — The Department of Agriculture on Nevis continues to build its livestock capacity and increase meat production in its quest to ensure food sustainability on the island.

Mr. Rohan Claxton, Livestock Extension Officer with responsibility for Production on the Maddens Stock Farm, says a breeding programme which was introduced in 2016 is bearing fruit.

“We started a breeding programme in 2016. During that year we had a total of 30 breeders… The calves that we got in 2017 we selected them to be replacement heifers along with the nucleus herd the Senepol.

Mr. Claxton noted that new breeds were introduced to improve the quality of the cattle and of the meat they produce.

“The breeds that we introduced [are] the Brown Angus and the Red Angus along with some Brahman bulls that we had previously. So cross breeding is one of the techniques used in order to develop the genetics or breeds on the island.

“Why we chose these breeds? The angus is well known worldwide as a beef producer, grows very fast, and the genetics is very, very excellent. The meat marbling is very good. The texture of the meat is very good. So that is why we are introducing this breed so it can grow fast to reach market weight,” he said.

According to the Livestock Extension Officer, there has been an increasing local demand for beef produced from cattle at the Maddens Stock Farm and as a result they have been concentrating on producing cows to sell to farmers who are interested in improving the genetics with their stock. They also supply the Department of Agriculture’s Abattoir.

“We normally supply the Abattoir when there is need to because the demand for beef is tremendous. I’m sure many of you went to local restaurants and you realise you are eating local ground beef, and the Abattoir also provides beef patties. The choice cuts, you will see them around in the supermarket.

“So presently the demand for beef has taken off. Some time ago we had cattle we used to call “beef festival” where we used to sell beef for $5.00 when nobody used to take it. Now the demand is there the supply is insufficient. Presently at the Abattoir, it’s $8.50 a pound [and] butchers $10.00 a pound,” he said.

Mr. Claxton said the nucleus herd at Maddens in up in the region of 100 heads and described them as being in pristine condition though rainfall was a challenge throughout the year with the exception of some in September.

However, in the absence of rain they had to resort to feeding them with supplements and to cut grass from elsewhere and transport to the cows to keep them alive.

“We supplement the cows with the spent hops and the Brewers grains. Those grains really, is a mixture of barley… the Brewers grain and the beer hops. So after all extractions … once it is fed in small amounts… gives it high protein high protein performance for the animals to benefit from.

“The main herd we tried to maintain them with the Brewers grains or spent hops and that has been our life saver. If you look at the animals, they are in prime condition because we had some rains during September and then the paddocks with the grasses [have] grown back so now they get some lush green,” he said.

According to Mr. Claxton, when it comes to foraging, each cow must consume at least 20 percent of its body weight. The average body weight of the cows at Maddens is around 800 to 1000 pounds, which means they should consume at least 20 to 30 pounds of grass on a daily basis, in order to get their protein to develop and grow and provide milk for their calves.

The cattle population in Nevis is low, under 300 heads at most. However, in the 60s and 70s the island had more than 7,000 heads of cattle and would export at a time when farmers engaged with mixed farming and cattle rearing.