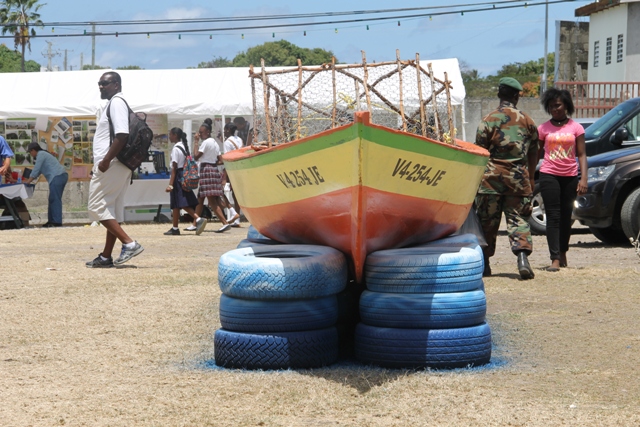 NIA CHARLESTOWN NEVIS (March 05, 2019) — In what is expected to be educational and entertaining, the Department of Marine Resources on Nevis will engage in a number of activities at the Department of Agriculture’s Open Day from March 28-29, 2019.

Mr. Randy Morton, Fisheries Officer, said on March 05, 2019 that their plans include a Conch Shell Blowing Competition and an opportunity to win offerings from a fish tank.

“Five persons have already confirmed their participation and we expect that number to grow. The registration fee is free for this year because it is a new competition. We are just testing it out to see how well it is received by the general public.

“It is called  ‘Bring your Shell and Come,’ so come, bring your shell and let us have a good time at the Marine Resources booth this Open Day,” he said.

Mr. Morton stated that persons are showing interest in the contest which is slated for Friday, March 29, 2019. It is expected to commence between 4 p.m. and 5 p.m.

“We have had a few fishers and a few other members of the general public who have showed an interest in being a part of this competition and, to be honest, I have to mention one or two names. A man by the name of Eddie Caines, when I saw him at St. Thomas’ Primary he said he was ready. I told him he has time to practise but he said he is “’ready right now.'”

“I spoke to George Weekes, most of us would know him as ‘Soap’ from Bath Village and … he is very interested in this competition. I had an opportunity to speak to him a second time…after he came in off sea, and I asked him if he was practising and he said there was no need. He reached one hand into his vehicle, pulled out a shell and blew a few notes for me right there on the spot, and that tells me that this man is truly ready to compete,” he said.

The fisheries officer indicated that the contest would not be limited to fishers. It would be open to 10-15 participants and he used the opportunity to encourage others to take part.

“Anyone else out there who knows how to blow a conch shell and blow it well, register with the Department of Marine Resources. We are located right there at Prospect and let us know. Let us put your name down,” he said.

Mr. Morton added that a private citizen had already donated $600 towards prizes. However, if anyone else is inclined to make a contribution to the contest they are welcome to do so.

Another highlight at the booth will be about a fish tank in an actual fishing boat which was exhibited during last year’s Open Day. He said the public showed great interest in the exhibit but this year there will be an added element.

“We are going to make a slight change, and that would be what you see in the fish tank is what you would be winning as a prize this year.