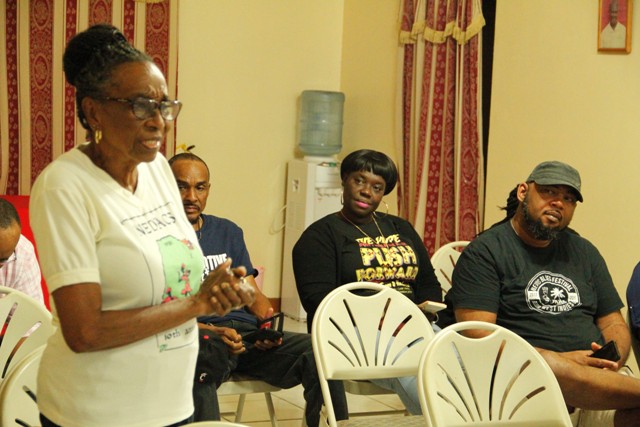 Ms. Irma Johnson (standing), a founding of Culturama, among participants at the Red Cross Building in Charlestown at the last of three consultations held by the Ministry of Culture and the Culturama Secretariat ahead of Culturama 45

NIA CHARLESTOWN NEVIS (March, 04, 2019) — Hon. Eric Evelyn, Minister of Culture on Nevis, is calling on Nevisians wherever they are in the world to  begin making plans to return home for the island’s summer festival, Culturama 45.

Mr. Evelyn extended the invitation when delivering a statement at a sitting of the Nevis Island Assembly at Hamilton House on February 28, 2019.

“Let me just once again, as I would have last year, encourage persons on Nevis as well as our nationals overseas and friends to make this one another homecoming.

“We want to invite all of you who are overseas to start making your plans, start making your bookings to be here for what promises to be the biggest and best Culturama ever, and of course I would encourage persons here on Nevis as well and not only to come and support but we want you to be a part of the festival,” he said.

The invitation comes on the heels of a recent three-part consultation hosted by the Ministry of Culture and the Culturama Secretariat to listen to the views, and to garner recommendations and suggestions from members of the public throughout the island.

Mr. Evelyn stated that the consultative initiative is a first in the history of the festival. The consultations were held at the Pond Hill Community Centre, at the Franklyn Browne Community Centre and concluded at the Red Cross Building in Charlestown.

The Minister reiterated that the festival is a government-run event and the people of Nevis have a right to contribute to how it is organized and run, and thanked those who participated.

“I want to thank those persons who participated. We had some wonderful ideas and we are looking forward to incorporate those ideas into making the 45th edition of Culturama the greatest and the best ever,” he said.

This year’s Culturama will be held with the slogan “Love! Passion! Pride! Culturama 45!”