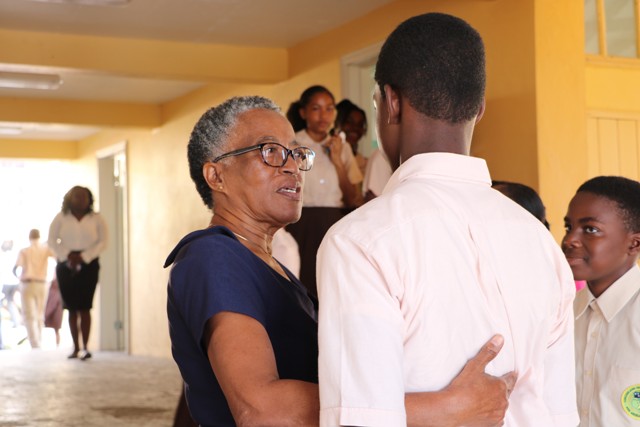 Her Honour Hyleeta Liburd, Deputy Governor-General on Nevis, interacting with students at the Gingerland Secondary School on January 25, 2019

NIA CHARLESTOWN NEVIS (February, 01, 2019) – Her Honour Hyleeta Liburd, Deputy Governor-General on Nevis, believes that adults need to set examples for children who are a product of their environment.

Mrs. Liburd made the comment in an interview with the Department of Information on January 30, 2019, after she held a series of talks with students of the secondary schools on Nevis and the Nevis Sixth Form College in an effort to bring them a message of encouragement, hope and love.

“All of us need to be good examples to the young ones in particular. They are a picture of us. No matter how you look at it, the community is a picture of the adults because the children learn from them.

“Children don’t just happen to know things that are negative. They hear them; they feel them and I would really like to encourage the parents to be good examples, to be strong in the training of their children. I really want them to see this as a precious task God has given them to bring up their children in the nurture of the Lord,” she said.

To adults who have not borne children, Mrs. Liburd who is also a mother, a life-long educator and deeply-religious person noted that they, too, are parents and, like parents, they could effect change among the island’s children.

“In terms of the rest of the adults in the community, I just want to tell you that we are indeed parents because a lot of the influences that we have in our lives come from the adults around us.

“I really want them to take it seriously when they are acting, when they are speaking, that they are examples. A lot of what we don’t like in the community can be eradicated if we change the way we behave and I wish we would with God’s help,” she said.