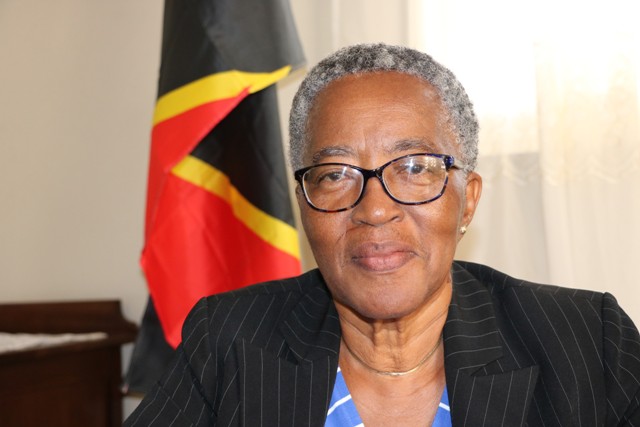 Photo caption: Deputy Governor-General of Nevis Her Honour Hyleeta Liburd at her office at Bath Plain on January 30, 2019

NIA CHARLESTOWN NEVIS (January 30, 2019) — A select number of students and teachers on Nevis had a special visit recently from Her Honour Hyleeta Liburd, Deputy Governor-General on Nevis, carrying her message of encouragement, hope and love.

At the end of her visit to the Charlestown, Gingerland and Nevis International Secondary Schools and the Nevis Sixth Form College, Mrs. Liburd, who is also a wife, mother, and life-long educator, told the Department of Information on January 30, 2019, that the intimate meetings came about because of her love for people and children.

“I was a child and there were experiences that I have had in my life that helped to make me who I am, and I believe if I can help these children to understand that despite of where they came from that they can make it, and I will gladly do that.

“I made it, everybody else can. So I think that is one of the first things that drove me but my love for children, my love for people is also one of the things that drives me because nobody is useless. There is no useless person…I believe that children have potential and they are special, and I really want them to feel it in their being that they are special, specially created by God for a special purpose, and I just thought that my going would help to bring home that fact to the children, and also to support the teachers in their efforts. I believe that when children have high self-esteem they do better and so, I just wanted to encourage them and let them know that they can reach their potential,” she said.

Mrs. Liburd noted that during the sessions students the students appeared attentive. There were occasional questions and she received comments after the session. However, she expressed hope that they understood her message.

In response to whether the same was done in the past, she indicated that Mr. Weston Parris, Deputy Governor-General visited schools on occasions but she couldn’t recall any other time it was done.

She stated that she hoped to continue interacting with students in various settings.

“There are many other things that I would probably like to do and I would like, yes, maybe to help the children wherever they are, not necessarily at school, to know that they can make a positive impact in the space they occupy. That’s my goal.

“I want the young people to know that wherever they go they can impact positively,” she said.