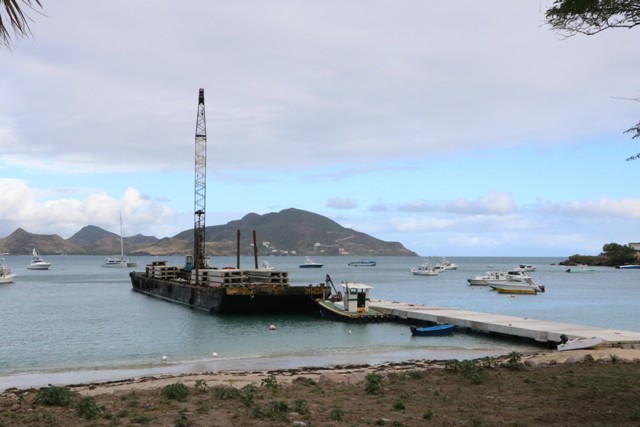 The barge from Sea Cure Marine Construction N.V on the construction site of the new water taxi pier at Oualie Bay on January 29, 2019

NIA CHARLESTOWN NEVIS (January 29, 2019) — Work has resumed on the construction of the new water taxi pier at Oualie Bay, with a new completion date and a longer wharf.

Hon. Alexis Jeffers, Deputy Premier of Nevis and Area representative for the St. James’ Parish, made the announcements when he visited the work site on January 29, 2019. He expressed satisfaction that previous challenges with the project had come to an end and work is expected to be completed in the coming three to four weeks.

“I am pleased to say that we have overcome those challenges at this point in time. There was also some challenges in terms of delay with the mobilisation out of St. Maarten to come back here to Nevis…The barge is now here. The workers are here and they are ready to push on with the final phase. We are just about 180 feet of pier that has been constructed so far…

“As a Cabinet we have decided that with the anticipated increase in traffic through this particular facility…with the addition of 120 feet, we will end up with just about 316 feet of pier with the “T” at the end of the 300 feet.  So we are preparing for what is to come in the future,” he said.

After the pier is completed, renovation work will commence on the existing building on the site which is slated to accommodate office space.

“It’s a phased approach and it is important to get the pier in first, based on the finance that we had at our disposal but we have certainly budgeted for this particular renovation in this budget cycle so we will get that started shortly.

“The entire property will be fenced to provide additional security as is consistent with Charlestown [Sea Port] and also the Long Point [Port] facility because we are hoping to operate at the same level of security that exists at those particular facilities. That is mandatory for us to ensure that we are providing safety and security to all of the persons that would utilise this area and also adhere to international standards when it comes to port facilities,” he said.